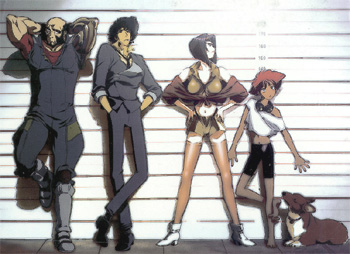 Cowboy Bebop is a celebrated Science Fiction and Film Noir anime television series consisting of 26 episodes (and one movie that takes place halfway in).

In the late 21st Century, Earth has become an unimportant backwater following a cosmic accident involving "hyperspace gates" that blew up half the moon and devastated the planet. Humanity has settled most of the solar system, with Mars becoming the new center of human society. Travel between worlds, while not especially fast, is commonplace and reasonably safe—as long as you watch your fuel and your back. But wherever humanity goes, so goes its criminal element, and thus the need for those who hunt criminals. To help keep up with the rise in criminal behavior, the solar system police eventually reinstated the bounty system of the Wild West—catch a bounty alive and deliver him to the cops, and you get paid. Gear up, space cowboys...

Originally broadcast from October 1998 to April 1999, Cowboy Bebop is the story of the five inhabitants of the spaceship Bebop and the living they (barely) make at bounty hunting. They are: hard-nosed ex-cop Jet Black, laid-back ex-hood and Jeet Kune Do master Spike Spiegel, gorgeous con-artist Faye Valentine, 13-year-old (mad) genius hacker girl Edward Wong Hau Pepelu Tivrusky IV (or simply Ed), and the genetically engineered "data dog" Ein. The Bebop's crew faces dangerous criminals, occasional starvation, a particularly disgusting refrigerator, and their own dark pasts over the course of the 26-episode series. Although the primary thrust is dramatic, there are moments of humor leavening the story which—despite its episodic nature—carries along a continuing plot and builds to an explosive climax. One of the defining thematic choices the show makes is that everything has a rich backstory, but almost nothing is explained in full; the stories are concerned with the problems in the present, so in many cases, only an implied history is given.

The other half of Cowboy Bebop is its sound. First off, it's one of the few anime that doesn't lose anything if you switch to English. Bebop also thrives on its soundtrack, composed by Yoko Kanno, which is almost entirely jazz music, with a few tracks even defying categorization—and some of the music was actually improvised to finished footage at the moment it was recorded. The show's soundtrack is not an afterthought, it is central to the experience, and many scenes are related solely through visuals and music, eschewing dialogue entirely.

Bebop was the very first anime to air on Adult Swim, starting on the very same night that the network itself premiered in August 2001. The show still airs in a regular timeslot on the network over a decade after its American TV debut, making it the network's longest-running show (Inuyasha is second; it started airing in early 2002).

The show is frequently evocative of both Westerns and Film Noir, though the single biggest influence on the look and feel of the series is the 80s and early 90s Heroic Bloodshed action movies directed by John Woo (such as A Better Tomorrow and The Killer); Lupin III is also a visible influence. Underneath the sci-fi and action flick surface, however, is an overall plot line primarily based on the most Japanese of all Japanese cinema: the Yakuza picture, a genre that is relatively unknown in the West.

A Cowboy Bebop movie (Cowboy Bebop: The Movie, aka Cowboy Bebop: Knocking on Heaven's Door) was released in 2001. Unlike many other anime movies, it is not an Alternate Continuity or sequel, but rather fits in between episodes 22 and 23 of the series, both in chronology and in quality.

In 2020, a live-action adaptation was announced for release on Netflix, starring John Cho, Mustafa Shakir and Daniella Pineda as Spike, Jet and Faye respectively; Yoko Kanno was called back for the soundtrack of the series. Production had reportedly already begun on its second season, but after being temporarily on hold due to the combined effects of Cho injuring his knee followed immediately by the COVID-19 pandemic, broadcast of the first season was delayed; it finally been given a premiere date of November 27, 2021.

A Star FOX-esque Playstation game and a beat-em-up Playstation 2 game based on the series were made, but were never released outside of Japan. If you're looking for Media Research Failure, you'll have to import the PlayStation 2 game.

Retrieved from "https://allthetropes.org/w/index.php?title=Cowboy_Bebop&oldid=1963204"
Categories:
Cookies help us deliver our services. By using our services, you agree to our use of cookies.