Have I Mentioned I Am Gay? 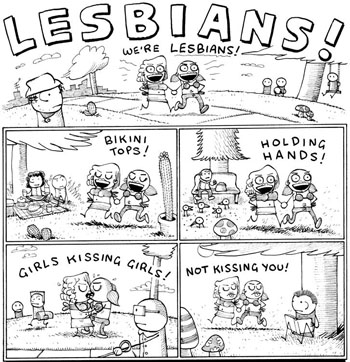 Have I Mentioned I Am Gay? is when we know that a particular character is gay because we are told so, often repeatedly, and not because we actually see them display any sort of romantic feeling or sexual attraction toward characters of the same gender. The character is out of the closet, and may even proudly talk about past relationships, but we, the audience, never see them going on dates with the same gender, let alone actually having sex. You might notice that on United States TV, you'll see girl-on-girl kissing, but never boy-on-boy unless it's a huge punchline, because Most Writers Are Male and Girl-On-Girl Is Hot. Every once in a while, especially in the later seasons of a show, the writers will become aware of this trope and suddenly (well, as sudden as it can be after three or four seasons) do a single episode that deals with the character's sexuality.

Often involves Token Gays and Unfortunate Implications, the main implication being that gays are lonely. The polar opposite of Ambiguously Gay, and often the inverse of the Transparent Closet. Sometimes overlaps with Invisible to Gaydar. See also: Word of Gay (when this comes from an author announcement rather than in-story), Get Back in the Closet, Urban Legend Love Life. If the character does get enough action for their sexuality to be more than an Informed Attribute, but still less than others, that's But Not Too Gay. When involving bisexuals, that is But Not Too Bi

Contrast Have I Mentioned I Am Heterosexual Today?

Examples of Have I Mentioned I Am Gay? include:

Retrieved from "https://allthetropes.org/w/index.php?title=Have_I_Mentioned_I_Am_Gay%3F&oldid=1558406"
Categories:
Cookies help us deliver our services. By using our services, you agree to our use of cookies.