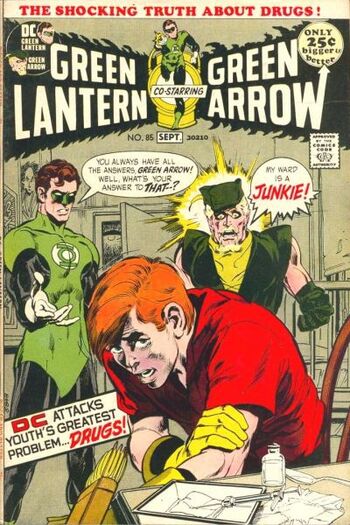 His nickname is "Speedy!" What did you expect?!

An episode, often in a sitcom, in which the lead confronts some highly emotional or forbidden issue from everyday life. Drug abuse, teenage sex, bulimia... At the end of the episode, the protagonist is Enlightened, and the guest character with the Very Special Problem is never seen or heard from again. Often there is an 800 number to call, should you (or someone you love) actually have the Very Special Problem. If the problem involves children in some way (and it almost invariably will), then it may also be promoted as something that "No Parent Should Miss". These often come about when networks or writers are bucking for awards.

The tone will typically be much, much more serious than other installments of the series, although with sitcoms, there may still be a comedic subplot or occassional moments where the Laugh Track is needed.

These episodes were far more common in the 1980s. They've largely fallen out of favor since then due in part to the increasing number of shows, particularly dramas, where issues such as drug/alcohol abuse, violence, sex and death are dealt with on an almost weekly basis. There's a certain variety of shows where essentially every episode has a special message, such as Touched By an Angel, Joan of Arcadia, etc. However, the police documentary genre (i.e. Police Stop, Police, Camera, Action!, Road Wars) and law enforcement dramas like Criminal Minds and Medium also use this trope fairly regularly, making this not quite a Dead Horse Trope.

Often ends up as an Anvilicious Narm, especially if it turns out to be a Clueless Aesop. Very ripe target for parody; these days, parodies of Very Special Episodes are probably more common than Very Special Episodes themselves. May also be vulnerable to Detournement. However they can also be handled with a great deal of respect and responsibility and outshine the rest of the regular season; though it's fairly rare that that happens.

See also Public Service Announcement and Too Smart for Strangers, a specific kind of Very Special Episode concerned with child abduction. See Compressed Vice for when a character is saddled with an issue for just long enough to illustrate the aesop, and Long-Lost Uncle Aesop for when a new character is introduced solely for this purpose and never seen again. See Christmas Episode, Christmas Special, Prison Episode, and April Fool's Plot for other specially-themed episodes.

Examples of Very Special Episode include: