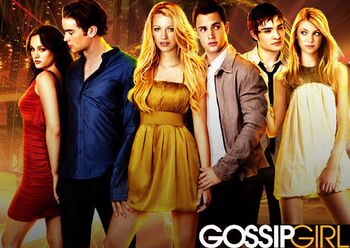 A Prime Time Soap starring a bunch of rich kids (and a few middle class kids) (sort of) from the Upper East Side of New York. Started off as a series of young adult novels by Cecily von Ziegesar, then made into a television show for The CW by Josh Schwartz, the creator of The OC and Chuck. There also exists a Manhwa series by Hye-Kyung Baek.

The novels and show followed the lives of several characters, primarily Blair Waldorf, Nate Archibald, Serena van der Woodsen, and Dan Humphrey, who (basically all) become involved romantically even though they are part of different crowds. Blair is the Determinator queen bee of the Upper East Side, while Nate is (in the novels at least) the stoned Prince Charming. Serena is a former bad girl, and Blair's mortal enemy/BFF while Dan is struggling to merely get accepted into a prestigious college, owing to the fact that his family doesn't have much money. Add in a wide array of friends and former friends, a Love Dodecahedron or two, and the narration of the mysterious "Gossip Girl".

Tropes used in Gossip Girl include:
Retrieved from "https://allthetropes.org/w/index.php?title=Gossip_Girl&oldid=1861155"
Categories:
Cookies help us deliver our services. By using our services, you agree to our use of cookies.