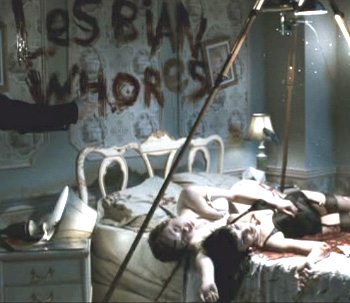 Often, especially in older works (to the extent that they are found in older works, of course), gay characters just aren't allowed happy endings. Even if they do end up having some kind of relationship, at least one half of the couple, often the one who was more aggressive in pursuing a relationship, thus "perverting" the other one, has to die at the end. Of course, it can also happen to gay characters who aren't in relationships, particularly if they're psycho lesbians or depraved homosexuals.

Nowadays, when opinions on sexuality are different, this justification will often be tried to via Too Good for This Sinful Earth. Sometimes it's because the Magical Queer has died in a Heroic Sacrifice so that the straights may live. "See, we didn't kill them off as a punishment or to avoid having them together, it was to point out how mankind isn't worthy!" Naturally, this is subject to Alternate Character Interpretation.

Also known as Dead Lesbian Syndrome. This trope can also be seen as a head-on collision between Sex Is Evil and All Gays Are Promiscuous.

See also Romantic Two-Girl Friendship and Bait and Switch Lesbians for the nicer way to let the ship down. If the characters' relationship is obscured, it drastically increases their chance of survival (note from the names of all three that they're most common for female couples. If you're a man, you're basically screwed).

Please note that sometimes gay characters die in fiction because in fiction sometimes people die (this is particularly true of soldiers at war, where Sitch Sexuality and Anyone Can Die are both common tropes); this isn't an if-then correlation, and it's not always meant to "teach us something" or indicative of some prejudice on the part of the creator - particularly if it was written after 1960. The problem isn't when gay characters are killed off: the problem is when gay characters are killed off far more often than straight characters, or when they're killed off because they are gay. This trope therefore won't apply to a series where Anyone Can Die (and does).

An approach in which every LGBT character ends up either in terminal misery or dead was common in the Hays Code era, where this was the only way to get the (already very rare) gay character past the censors. Not quite the same trope as Queerbaiting, a later pattern in which a same-sex romance would be briefly alluded to but then never developed further, to the frustration of LGBT viewers.

Can be seen as Truth in Television in some cases, as gay and lesbian people are at a substantially higher risk for suicide. And, well, dying violently at the hands of a stranger. And the fact that AIDS hit the gay male community most prominently provided potent fresh fuel for this long running trope (which, like many things about the eighties, still has an effect on more recent works). Not to mention that nothing communicates that "the wage of sin is death" quite like killing off your gay character.

Period fiction also needs to take into account the lack of understanding of gay characters, whereby depicting the death or murder of homosexuals may not reflect the views of the author but the social dynamics of the setting.

Examples of Bury Your Gays include:

Retrieved from "https://allthetropes.org/w/index.php?title=Bury_Your_Gays&oldid=1893506"
Categories:
Cookies help us deliver our services. By using our services, you agree to our use of cookies.