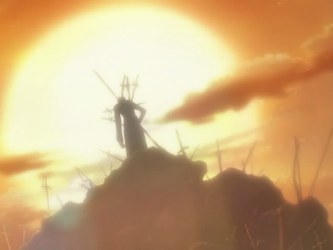 Always alone, on the hill of swords, intoxicated with victory... thus, this life has no meaning...

It may factor in on the scale of the Heroic Sacrifice, that you must die alone. Sending someone away, so that you die alone, is often a generous gesture, and those who leave may be deeply criticized. When What You Are in the Dark faces you, the villain may taunt you with not only dying, but dying alone.

Lonely at the Top almost always carries the threat that the character will die alone. It is frequently suggested to the single and childless that this may result from their actions.

Dying emotionally alone with other people physically present, as in the opposite of You Are Not Alone, is just as bad.

The one exception when a character is performing a Heroic Sacrifice, particularly after More Hero Than Thou dispute: then, dying alone carries the consolation that the other characters have escaped with their lives.

Conversely, characters may go to great efforts to ensure that a dying character is not alone to defy this trope, which is often explicitly invoked as the reason for staying. Particularly True Companions—a You Are Not Alone moment of particular poignancy—but The Rival, the Worthy Opponent, the Friendly Enemy may all be willing to stay with the dying Hero, and he would do the same for them. Indifferent people don't count, but even a stranger willing to respond to Please Don't Leave Me can help.

They may do this even if the dying person is apparently unaware of them. Similarly, the closest friend in a group of people may insist on being the one to deliver a Mercy Kill. If death takes a long time, Unbroken Vigil may result. Falling asleep by a deathbed is not always considered failure. Dying characters may try to force the issue if the other character is clearly on the verge of collapse.

When a character is Dying as Yourself, it may allow the others to prevent this.

When a character dies alone, Meaningful Funeral, To Absent Friends, and Famed in Story may ensue, to ironically point out that the character actually had friends, or underscore the value of his Heroic Sacrifice. On the other hand, a funeral with no mourners reinforces the loneliness.

Note that this trope is not only limited to heroic characters. If used on a villain, particularly the Big Bad, it will serve to show us just what a miserable and horrible human being they really were, to the point where even their own supposedly loyal servants won't be bothered to accompany them as they die.

Examples of Dying Alone include:

Retrieved from "https://allthetropes.org/w/index.php?title=Dying_Alone&oldid=1966888"
Categories:
Cookies help us deliver our services. By using our services, you agree to our use of cookies.