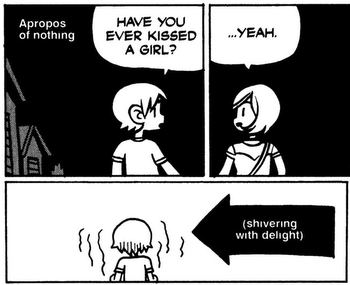 And if he was in Lesbians with her before...

There is a general assumption that deep inside his heart every straight/bi man is turned on by two or more women interacting sexually. Specifically, lesbians. The idea being that if a woman having sex is arousing, then two women having sex is twice as arousing. Men are not complicated.

From a cynical point of view, however, what men want is not lesbians per se, but bisexual women, (because, dude, Bisexuals) but alas, oftentimes there are No Bisexuals in TV land, and chances are, a male presence would not be so welcome within lesbian sexual activity in real life, due to them being, you know, lesbians. Plotwise, this often means that the girl/girl focus will suddenly disappear when it's time for the guy to get involved; or else take a back seat to him being the focal point of a mutual Love Triangle. Or the other girl will get killed. "Darn, your lesbian lover got killed. Well, you still have me!"

Because Most Writers Are Male and since young men are key demographics for networks and advertisers, lesbian Fan Service aimed at the latter flourishes. See: Cat Fight; Pillow Fight; Lovely Angels; Girls Love; Romantic Two-Girl Friendship; Schoolgirl Lesbians; Sweeps Week Lesbian Kiss; and Skinship Grope. Expect a male character to stereotypically have this belief when All Men Are Perverts. If this goes too far, it can lead to less welcome tropes such as Double Standard Rape (Female on Female).

The trope Girl-On-Girl Is Hot is for character reactions to female/female titillation. For most female/female Fan Service that doesn't involve another character having a voyeuristic reaction, see Les Yay. For those who are interested in the romantic and emotional aspects of lesbian relationships, see Yuri Fan. For the Spear Counterpart, see Guy-On-Guy Is Hot.

Examples of Girl-On-Girl Is Hot include:

Retrieved from "https://allthetropes.org/w/index.php?title=Girl-On-Girl_Is_Hot&oldid=1953929"
Categories:
Cookies help us deliver our services. By using our services, you agree to our use of cookies.