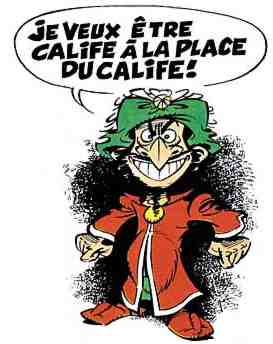 "I want to be Caliph instead of the Caliph."

Iznogoud (1962-) is a French-Belgian comic book series created by Rene Goscinny and illustrated by Tabary. The title character is the scheming, ambitious and power-hungry Grand Vizier of the fictional Caliph Haroun El-Poussah. His obsession is to depose the Caliph by hook or by crook, and to set himself up as the new Caliph in his stead.

In order to achieve this goal, he tries every dirty trick, but fails every single time.

Tropes used in Iznogoud include:
Retrieved from "https://allthetropes.org/w/index.php?title=Iznogoud&oldid=1898089"
Categories:
Cookies help us deliver our services. By using our services, you agree to our use of cookies.