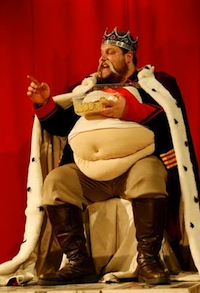 A very popular image in fictional works is to portray a King as tremendously fat. At a minimum, kings are considered corpulent, though more extreme examples will depict them as morbidly obese. This stems from the popular impression that a king spends his days sitting on his throne, feasting on the spoils from his taxation of the masses, or simply warming it while doing nothing.

In actuality, the trope is universal in neither fiction nor reality. When monarchs are depicted as overweight, it's usually meant to convey that they're either hedonists who grow fat on the work of the oppressed lower classes, or benign-but-weak rulers who are helpless when their kingdoms are threatened. Usually this will be averted in the case of "heroic" kings; it's most often when the king is corrupt, a peripheral force for good, or a neutral arbiter that he'll be fat. In Real Life, monarchs vary as widely in body shape as everyone else, so it stands to reason that some would fall under this trope.

Given that getting enough to eat has been a problem for much of humanity's history, it is a logical consequence of being the one in charge.

This trope can sometimes be applied to queens, but it tends to happen less frequently. Whether this is because mocking women as fat is considered unseemly or due to the relative scarcity of fictional queens in general is left to the reader. A notable exception is the Hive Queen; if she's an egg-layer for the species, then the queen will probably be depicted as overweight to convey this aspect.

This trope probably came from Henry VIII, who was infamously morbidly obese in later life. This is also from the "jolly fatman" etymology, as the rich are often depicted as fat. Therefore, if you're the king, you must be tremendously fat. This is because the rich get more food, so they must eat more.

Name comes from both a pun on Oedipus Rex and adipose tissue (or "fat", as it is known to the layman).

Often related to Villainous Glutton and Fat Bastard. Also see Large and In Charge if they possess Stout Strength.

Contrast Royals Who Actually Do Something, Modest Royalty. Has nothing to do with the Adipose aliens from Doctor Who.

Examples of Adipose Rex include:

Retrieved from "https://allthetropes.org/w/index.php?title=Adipose_Rex&oldid=1930129"
Categories:
Cookies help us deliver our services. By using our services, you agree to our use of cookies.