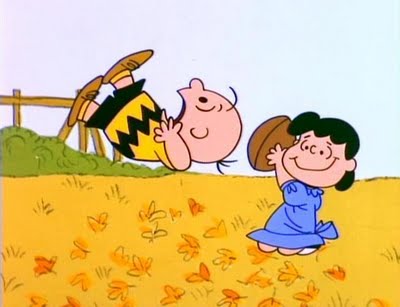 Hooray! The Butt Monkey has finally had something go right for once in their unhappy life! And with twenty minutes to spare, we're sure to see their new joyful existence play out for the rest of the episode... right?

That, right there, is the feeling and painful acknowledgment by the Genre Savvy viewer that Failure Is the Only Option. Why? Because The Woobie is not going to get to keep her money and move out of Perpetual Poverty. James Bond will not stay Happily Married to the Girl of the Movie because of the Cartwright Curse. The home that The Drifter has been accepted into will promptly become a Doomed Hometown. Samurai Jack will give up the most recent Phlebotinum to return to his home time and Set Right What Once Went Wrong in order to save the helpful villagers nearby. Ash Ketchum will make it to the Top 4 of the Season Finale's Tournament Arc only to lose to a random Canon Sue who owns Olympus Mons. Charlie Brown will get the football yanked out from under him by Lucy once again just as he's about to kick it. And deep down, we know it and expect it.

While the permutations are endless, the result is the same: writers Yank the Dog's Chain, keeping the bone just out of reach, making even the simplest goals seem like Tragic Dreams.

Clever writers can cause viewers quite a bit of tension and suspense this way, since we know the good turn can't last and that something will inevitably come to take it away. Hacks will merely cause viewers to bash in a new window and abandon a series in frustration.

A side effect of Status Quo Is God. Frequently seen when How We Got Here and In Medias Res are used. Not to be confused with Foregone Conclusion. Compare Like You Would Really Do It for the "positive" version. Viewers can avoid this if they read the Snicket Warning Label. Can be considered a sister trope to Your Princess Is in Another Castle and Will They or Won't They?. See also Hope Spot and Diabolus Ex Machina.

Despite how obvious they can be, there are spoilers below, so BEWARE SPOILERS.

Examples of Yank the Dog's Chain include: