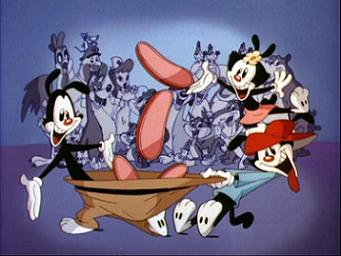 There's baloney in our slacks.[1]

Produced by Steven Spielberg, Animaniacs was a revival of an old show concept: a collection of cartoon shorts in a half-hour kids' show. Rather than recycling or remaking old theatrical shorts, Animaniacs relied on original stories featuring original characters (though it did indulge in a bit of self-referential cliché riding at times). This approach was unique in the 1990s, since goofball/slapstick-type shows (think Looney Tunes/Merrie Melodies) had been driven out by Moral Guardians in the 1980s.

Animaniacs was also unique production-wise: Spielberg gave the writers complete creative freedom over the direction of sketches (just like with Tiny Toon Adventures and Freakazoid!), which is why many fans hold such fond memories of it. Viewers don't love it because of Nostalgia Goggles -- it was a genuinely creative and well-written show (its Emmy awards attest to that). Kids even learned from it; most of Generation Y will fondly remember trying to memorize "Yakko's World" and "Wakko's America" for geography tests. Raise your hand if you learned about the conquistadors because of "The Ballad of Magellan". Who says educational shows can't be fun?

Unlike other Saturday Morning Cartoons of its time, Animaniacs didn't air on Nickelodeon or Cartoon Network (at least not initially; it has been on both of those since the series ended as syndication reruns). It originally aired on Fox Kids and (later) Kids WB, both of which were programming blocks on broadcast network stations, making Animaniacs a godsend to kids without cable.

Shorts were generally self-contained, though they frequently crossed over with each other without much warning. Each had a cast and premise of their own:

Other supporting cast members included Mr. Skullhead (in the "Good Idea, Bad Idea" shorts), a nameless disaster-prone mime, a nameless kid who is the friend of another (never shown) kid named "Randy Beeman", and Mr. Director (a crazed movie director based on Jerry Lewis).

A Direct to Video movie, Wakko's Wish, was created following the show's run; rather than being a compilation of various shorts (old or new), it was a film with a self-contained plot which saw all of the show's main characters (and several background characters) interacting with one another. See The Resolution Will Not Be Televised below.

In 2020, Animaniacs finally received a long-awaited revival on Hulu, developed by Wellesley Wild and Steven Spielberg. The new series sees the return of the Warner brothers, Yakko and Wakko and their sister Dot (voiced respectively by their original voice actors, Rob Paulsen, Jess Harnell, and Tress MacNeille), and of Pinky and the Brain (voiced by their respective original voice actors Paulsen and Maurice LaMarche). Two seasons were ordered to be produced by Amblin Television and Warner Bros. Animation; the first season premiered on Hulu on November 20, 2020, and the show's second season will premiere in 2021.

Animaniacs is the Trope Namer for:
Tropes used in Animaniacs include:
Retrieved from "https://allthetropes.org/w/index.php?title=Animaniacs&oldid=1931909"
Categories:
Cookies help us deliver our services. By using our services, you agree to our use of cookies.