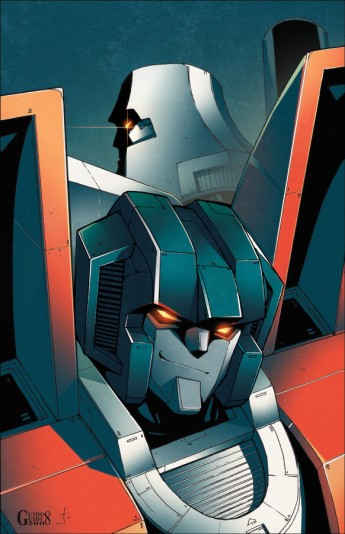 "I've always got Megatron's back... in my sights."

In some stories the Big Bad casts a shadow over everyone: They might be afraid of him, they might be his minions, or they might be the heroes trying to defeat him. Then there's this guy.

The Starscream is a unique character who falls outside this pattern: a villain too ambitious or individualistic or just too stubborn to accept the supremacy of the Big Bad. Instead, this villain actually dreams about overthrowing the guy everyone else fears and taking his place. Sometimes he is a (grudging) servant of the Big Bad; sometimes he is entirely outside the established power structure. Either way, if the Big Bad ever stumbles or shows weakness, the Starscream will be there, ready to kick him out of the Astrotrain.

Depending on the nature of the character, he may be an over-optimistic fool or someone who might actually be able to pull it off. If the character is Badass enough, the heroes might be forced to try and stop him from toppling the original villain. Usually fond of playing Commander Contrarian to their boss' schemes (deservedly or not), who will normally Neck Lift them into kowtowing to their will. It can be hard to justify why the Big Bad keeps them around, but it may most commonly be so the Big Bad has a reason to always keep his guard up (and thus can rest assured that he will never become too complacent).

Differs from the Reliable Traitor in not always working for the Big Bad and in his reasons for working with the villain (if indeed he does so).

Not the same as The Dragon getting a promotion when he survives the Big Bad's downfall—that's Dragon Ascendant. Also not to be confused with Dragon Their Feet, where the Big Bad's right hand man screws his boss over by being strangely absent at a bad time. Compare and contrast Dragon with an Agenda, who has different goals from the Big Bad but is at least nominally loyal and generally won't turn on the Big Bad unless said goals are threatened.

If the Starscream' succeeds in taking over the mantle of Big Bad from his superior, the former Big Bad may have actually been a Disc One Final Boss. If he was consistently portrayed as the more dangerous or important of the two to begin with, then he's also a Dragon-in-Chief.

Quite strongly related to the Rule of Two, where this is expected and quite nearly mandated.

Many examples can end up being The Millstone if their schemes consistently screw up the Big Bad's plans enough to let the heroes keep pulling off wins.

See also Bastard Understudy, with a similar attitude but more subtlety and patience, and The Dog Bites Back, for when the attacker has not planned but takes advantage of weakness (and/or Right Makes Might if said attacker was actively abused by his new victim.) Often involves Nice Job Fixing It, Villain. All examples prone to contain Chronic Backstabbing Disorder.

Heroes almost never have this problem, because while sometimes subordinates do turn against them, they rarely stay with the heroes afterwards, as a Starscream often does. Maybe this is one big reason heroes win far more often than villains do; they do not make a habit of allying themselves with folks who they obviously can't trust, nor do they make a habit of abusing subordinates, a big reason why they feel Machiavelli Was Wrong. The Lovable Traitor is probably the closest counterpart on a hero's side, but even folks like that rarely have malicious intent like the Starscream does.

Sub-trope of Evil Versus Evil. Opposite trope of The Creon, who will do anything in his power to stay second-in-command at all costs. Contrast Sarcastic Devotee, Professional Butt-Kisser, and Villainous Friendship (where The Dragon and the Big Bad trust each other as friends).

Examples of The Starscream include:

Retrieved from "https://allthetropes.org/w/index.php?title=The_Starscream&oldid=1962676"
Categories:
Cookies help us deliver our services. By using our services, you agree to our use of cookies.