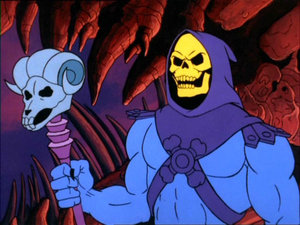 I dunno guys, he seems pretty legit to me.

A lot of fiction out there has a tendency to employ incredibly black and white perspectives to the characters and their actions. Due to the belief that its target demographic (usually children or just total morons) can't understand subtler shades of evil, many works of fiction create a stark contrast between the heroes and villains. When this happens, the creators will bring in their Obviously Evil® Design Team.

When a work of fiction indulges in Obviously Evil®, every villain will be a Card-Carrying Villain, usually Color Coded for Your Convenience in shades of black and red. There won't be any Well-Intentioned Extremists, Knights Templar or pretty much anyone that doesn't accept and accentuate their evilness. If you see anybody that might seem to be a shade of grey on the side of the villains, it will usually basically be a hero with a slight bit of behavior modification to work with the villains (and an inevitable Heel Face Turn coming up during Sweeps). If the villainous group is a governing body, it will always be an Evil Empire with a 0% Approval Rating. There aren't any Punch Clock Mooks that just accepted the job because it's work, but, instead, Exclusively Evil Faceless Goons that act like miniature versions of the main villain and provide no guilt whatsoever, when they get killed by the truckload.

The goals of the villains and their organization are always incredibly eeeeeevil, with one of five purposes: world domination, world destruction, corruption, genocide, or antagonizing the heroes. Nobody on the side of evil will ever Pet the Dog (except maybe the none-too-subtle Heel Face Turn candidate). Even their imagery is blatantly made as a contrast to the heroes, with lots of skulls, Spikes of Villainy, and other assorted things. Imagine a villain whose entire body is made of Red Right Hands, stitched together with thread made from the skin of dead puppies and you're beginning to get the idea.

Note that it's possible to have Obviously Evil figures in a normally more subtle setting; frequently, the justification is that the character is so far gone into his Card Carrying Villainy (or some brutal variation of Blue and Orange Morality) that he doesn't care what other people think of him.

Fiction that employs this is almost always Anvilicious to a fault, being the most extreme example of Black and White Morality. If the writers don't like X, they can just have someone Obviously Evil doing X.

Compare Black and Grey Morality, Villainous Fashion Sense. Not to be confused with Devil in Plain Sight.

Tropes invoked in the establishment of this style include:

Not to be confused with Obliviously Evil.

Examples of Obviously Evil include:

Retrieved from "https://allthetropes.org/w/index.php?title=Obviously_Evil&oldid=1967449"
Categories:
Cookies help us deliver our services. By using our services, you agree to our use of cookies.