Everything About Fiction You Never Wanted to Know.
(Redirected from Kuroshitsuji II)
Jump to navigation Jump to search 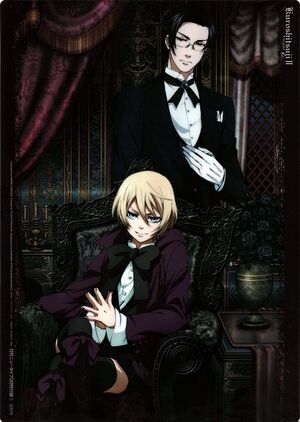 Given the very final way that the first Kuroshitsuji anime ended, it didn't seem like there could ever be a sequel. However, financial realities had their way and a sequel, titled Kuroshitsuji II, was made anyway.

Alois Trancy is a 13-year-old earl who has made a deal with the demon Claude Faustus who now serves Alois as his black-clad butler. The setup is nearly identical to the first season, but the personalities of the characters involved are very different to the point of being able to be perceived as intentional Jungian shadows of the main characters of the previous season. This changes the entire dynamic.

However, it turns out that despite first appearances this season is not unconnected to the previous and is in fact a true sequel, with numerous characters returning including Sebastian and Ciel as main characters.