Everything About Fiction You Never Wanted to Know.
(Redirected from Advent Children)
Jump to navigation Jump to search 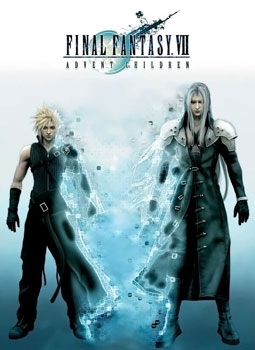 To those who loved this world...
And knew friendly company therein...
This reunion is for you.

Two years after the destruction of Meteor in Final Fantasy VII, people all over the world are now infected with the deadly Lifestream-distributed disease Geostigma. In spite of this, humanity is still working to rebuild in the wake of Sephiroth's attempts at global destruction -- and those who saved the world are no exception. In the city of Edge (built from the remnants of Midgar), Cloud now lives a quiet life with Tifa, Marlene, and a sickly orphan named Denzel. To Cloud's dismay, he soon discovers that the influence of Sephiroth is far from gone…

Advent Children served as quite the turn-around for Square Enix (specifically, the Square half) after Final Fantasy the Spirits Within flopped -- it proved Square does have what it takes to make a movie that's at least watchable. Advent Children really is a Love It or Hate It entry in the franchise (like so many before it), but the biggest complaint for both fans and non-fans was the hard-to-follow storyline (even with Word of God present to help clear things up).

Limited-edition copies of the movie were bundled with a novella detailing several characters' points of view during the two-year Time Skip. The Advent Children Complete Blu-Ray re-release included an OVA version of one of the novella's stories and added additional footage to the film that either helped to expand on much of the plot (which was a necessary move) or alter entire parts of it (which wasn't.)

The original release of Advent Children can be seen (legally) for free on YouTube.

Advent Children is the LONGEST CUTSCENE EVER!!!