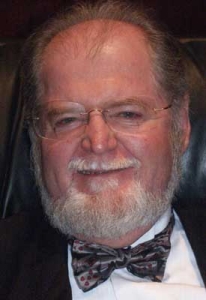 A prolific writer of Speculative Fiction, Larry Niven (April 30, 1938 - ) is best known for The Verse of Known Space, a very vast and detailed universe, which includes Ringworld and its sequels (which were one of the inspirations for a certain Xbox Launch title which was an FPS...) ; the mysteries of Gil from ARM; the Man-Kzin Wars, which ended up a professional Round Robin; the voyages of Beowulf Shaeffer; the human-ancestral Pak Protectors and the Precursors known as the Slavers. Known Space is notable for the many biologically plausible Starfish Aliens which neither look nor think like humans.

Also responsible for numerous works with Jerry Pournelle, including The Mote in God's Eye (from which the term for a third hand -- the "gripping hand" -- comes. The phrase is used in the context of there being three options from which to choose, the dominant concern being the gripping hand[1]) and Lucifer's Hammer. He's also worked with Steven Barnes on the Dream Park series.

Niven's other notable work includes The Integral Trees and its sequels, A World Out Of Time which examines the implications of slower-than-light relativistic travel used as a form of Time Travel, and the Fantasy series of The Magic Goes Away (Namer of that trope). He also wrote the influential Man Of Steel, Woman Of Kleenex, referenced often in geek culture, and some of the backstory for the post-Crisis on Infinite Earths Green Lantern Corps origins.

There is more than one Shout-Out to him in Magic: The Gathering. A very powerful necromancer, Nevinyrral shows up, on the very powerful Nevinyrral's Disc, and also wrote the "Necromancer's Handbook", a field guide for aspiring necromancers.

Niven often has Shown His Work.

Larry Niven is the Trope Namer for:
Works by Larry Niven include:
Retrieved from "https://allthetropes.org/w/index.php?title=Larry_Niven&oldid=1869015"
Categories:
Cookies help us deliver our services. By using our services, you agree to our use of cookies.