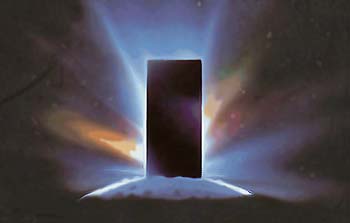 "And because, in all the galaxy, they had found nothing more precious than Mind, they encouraged its dawning everywhere."

Also known as "ancients." They are a standard fixture of much science fiction and fantasy: an ancient race whose culture and knowledge rose to its pinnacle in ages long past but which is now extinct or Ascended to A Higher Plane of Existence. In science fiction settings, they are usually considered the first race to have gained sentience in the universe or galaxy, giving them a noticeable leg up on everybody else; in fantasy settings, they will usually be the original, pinnacle sentient species created by the gods/God. At their height, they are usually rumored to have been capable of doing (and have done) just about anything, up to and including creating intelligent species and reworking entire worlds with a snap of a finger, and almost any strange and persistent mystery in the story's 'verse is usually laid at their feet. They may have been sufficiently advanced, or just much better than everyone else with technology/magic, but either way they left their mark, a mark that remains to this day.

Then they vanished into myth, leaving behind nothing but tantalizing ruins and rare, sometimes incomprehensible artifacts and dangerous weapons. Just why, no one knows. Perhaps they Ascended To A Higher Plane Of Existence, or were wiped out by a disaster or war, or maybe they just relocated en masse to somewhere else where they haven't been found yet.

Whatever the reason, they set the stage for the modern world, left behind a few MacGuffins and surprises for the heroes and villains to find, and then got conveniently out of the way. And then there are the times where they themselves are the reason everything's gone to hell, and they intend to keep it that way.

Bonus points if Earth Humans are Precursors and their incredibly human descendants try to rediscover their heritage—or, conversely, if Earth Humans are the only descendants. If Humans are the Precursors and everyone's scared of them, that's Humans Are Cthulhu. If they pick on their descendants, that's Abusive Precursors; if they couldn't care less about anyone else, it's Neglectful Precursors; if they help their descendants, it's Benevolent Precursors. If there's one or more race that played Precursors to the Precursors, then they're Recursive Precursors. Any and all of these are susceptible to Awakening the Sleeping Giant. If they gave their tech or it's being used by another race, it's Low Culture, High Tech. Very often, their most powerful technology will appear deceptively primitive and/or ceremonial.

Very commonly used to justify Rubber Forehead Aliens: everyone was made from a common template by the Precursors, so they look pretty similar.

Not to be confused with the space flight sim, The Precursors. Nor is a Precursor who's somehow still hanging around, unnoticed, an Embedded Precursor.

Examples of Precursors include:

There is also the race know as the Watchers, who started to do something similar, but got cold feet when early interference with a much more primitive race led to horrible wars. They have sworn to not interfere with their nigh godlike powers, only record what happens. (The Watcher appointed to Earth is a juvenile delinquent who breaks this rule regularly, but surreptitiously, so as to not get in trouble with his kind.)

In the second novel set in the Uplift Universe, Startide Rising, the first dolphin-captained Earth ship discovers what is assumed to be a fleet of the fabled Progenitors, and must try to return to Earth while being hounded by bickering alien battle fleets after the transmission of their findings is intercepted; the most active (and warlike) of the alien races/alliances are not happy that the wolfling Humans might have the key to the fate of the Progenitors (which could prove most or all of their belief systems wrong. The idea that humans may be the descendants or direct product of the Progenitors is also examined.

In her Witch World fantasy novels, humans migrated to High Hallack centuries ago only to find that the Old Ones had been there before them; these Neglectful Precursors left behind quite a few ruins and dangerous artifacts.

Ironically, the race that is actually known as the Precursors (or Forerunners, as there is no official translation to English) are non-sentient proto-lifeforms which have been created by an energy being (supposedly, the first being to ever gain sentience in the universe) to serve as seeds for its copies. The Precursors contained within themselves the first ever DNA molecule. The unintended side effect of this was the creation of all known organic life in the galaxy.

The unseen race who caged the Beast also qualify. Bonus points for having done this before the beginning of time. Extra bonus points for the Doctor pointing out that this is both stupid and impossible. But that doesn't stop it from still being true.

The Apocrypha expansion has given us a glimpse of some of the old technology which the precursor humans left behind: the sleepers. Ancient drone ships guarding long forgotten structures packed with technology that makes the most advanced player ships and weaponry look like we're using BB guns to fight enemies with nukes. The technology that has been scavenged so far has allowed the playerbase to build relatively small cruisers with the firepower and defenses equal to and even beyond battleships. It will be a terrifying day when we can finally build new kinds of battleships with sleeper tech.

In a less significant role, the Alimbic race fits this trope rather blatantly in Metroid Prime Hunters. They go extinct long before the events of the game containing the Eldritch Abomination Gorea in the appropriately named Oubliette. They are said to have created incredibly advanced technologies, including an "ultimate weapon."

Retrieved from "https://allthetropes.org/w/index.php?title=Precursors&oldid=1917748"
Categories:
Cookies help us deliver our services. By using our services, you agree to our use of cookies.