Everything About Fiction You Never Wanted to Know.
Jump to navigation Jump to search
/wiki/Harry Harrisoncreator 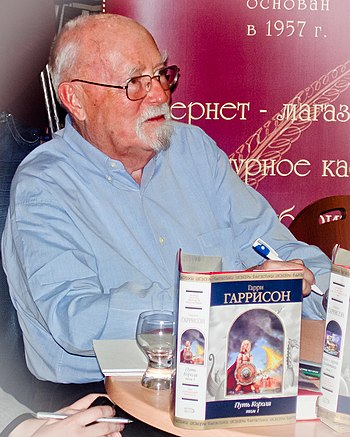 He was best known for his humorous SF, which includes The Stainless Steel Rat series, the Bill the Galactic Hero series, and the stand-alone novels The Technicolor Time Machine and Star Smashers of the Galaxy Rangers.

He also wrote serious SF, including Make Room! Make Room!, which inspired the film Soylent Green (although the film's most famous plot element was not in the book); the Deathworld trilogy; the To The Stars trilogy; and the West of Eden trilogy.

Works written by Harry Harrison include:
Harry Harrison provides examples of the following tropes:
Retrieved from "https://allthetropes.org/w/index.php?title=Harry_Harrison&oldid=1868980"
Categories:
Cookies help us deliver our services. By using our services, you agree to our use of cookies.