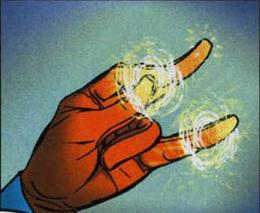 More than just a Strange gesture.

Any physical activity required for magic, ranging from simply pointing at the target up to day-long ritual dances.

At its simplest, this is just a way of showing the wizard is actually doing stuff. They will point at the target, wave their hand around to move it, and close their fist to crush it. Compare with the Pstandard Psychic Pstance. Moving up a step, some types of spell require precise gestures to work, leading to wizards with very nimble fingers as well as an excuse for them not to wear armor involving the restriction of mobility. The precise gestures have to be memorized as part of the spell.

If the action isn't simply a gesture, but a heavily physical action then it's Full-Contact Magic. Set it to rhythm and you have Magic Dance.

A common gesture for this trope is the Badass Finger-Snap.

Examples of Magical Gesture include:

The Emotiv guy used his hands to try and cue himself to think the same way every time, performing what looked suspiciously like something out of Star Wars to get things to float or vanish. But they said that wasn't really necessary. In fact, they are playing around with a game mode that would punish any physical movements you make while trying to perform the mental magic.