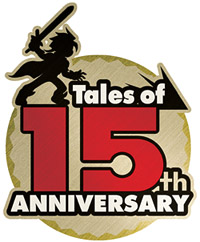 The Tales series is a long-running JRPG series by Namco Bandai, famous for its action-combat battle system, copious amounts of Character Development and continued Deconstruction of the very genre it inhabits.

Earlier games in the series were developed by Wolf Team, once a subsidiary of Telenet Japan, which was reorganized as Namco Tales Studio in 2003. Namco Tales Studio was shut down in 2011 but absorbed into Namco Bandai, which intends to continue the series despite the closure of the studio.

The series is divided into two sections:

Anime adaptations of the Tales series include:

And Now for Something Completely Different

See also Star Ocean, a RPG franchise made by many of the same creators as Tales of Phantasia.

Information and tropes pertaining to the individual titles are on their respective pages.

The following tropes are common to many or all entries in the Tales (series) franchise.
For tropes specific to individual installments, visit their respective work pages.

Retrieved from "https://allthetropes.org/w/index.php?title=Tales_(series)&oldid=1776501"
Categories:
Cookies help us deliver our services. By using our services, you agree to our use of cookies.