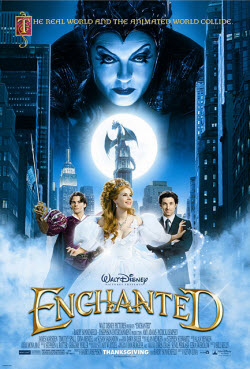 The Real and Animated worlds collide, and cause an enormous philosophical discussion on Fairy Tales.

Enchanted is Disney's Affectionate Parody of... well, a Disney movie, specifically the ones that spawned the Disney Princesses.

Giselle lives in the beautiful animated land of Andalasia, where Genre Tropes abound. She falls in Love At First Sight with the handsome Prince Edward, and they are to be wed the very next day. But his stepmother, the wicked Queen(-Regent) Narissa, doesn't want to surrender the throne, so she throws Giselle down a Portal Pool to modern day, live action, New York City. There she is rescued by Robert, a divorce lawyer who doesn't put much stock in "Happily Ever After". Prince Edward follows Giselle to New York in hopes of rescuing her, Robert's fiancée Nancy is caught in the middle, and Queen Narissa sends her lackey Nathaniel after Giselle in hopes of killing her.

The movie is a Decon Recon Switch of classic Disney fairy tales, and continuously bounces between both ends of the Sliding Scale of Idealism Versus Cynicism. Either way, though, it's still fun, never cheesy (save the opening, which is supposed to be cheesy), and doesn't take itself too seriously. The hand-drawn animation in this film, as well as how well it won the audiences over, were probably yet another reason why Disney chose to return to producing 2D films on their own.

In November 2021, Disney announced that the Sequel, Disenchanted, would premiere in Fall 2020, exclusively on Disney+.

Not to be confused with Ella Enchanted, nor with Orson Scott Card's Enchantment.

Retrieved from "https://allthetropes.org/w/index.php?title=Enchanted&oldid=1945692"
Categories:
Cookies help us deliver our services. By using our services, you agree to our use of cookies.