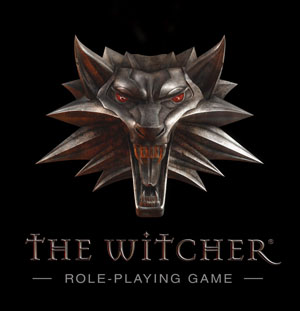 What would you get if you took the corpse of JRR Tolkien, ground it up into a fine powder and snorted it off the doughy breasts of a prostitute suffering from Tourette Syndrome? Well for starters, you'd get a throatful of dead writer, then the police would probably want to talk to you, and no doubt you'd make an enemy of Mrs. Tolkien. What you probably won't get is The Witcher, because it's a Video Game and more easily acquired from your local electronics retailer, you idiot.
—Ben "Yatzhee" Croshaw, Zero Punctuation.

The Witcher is an RPG PC game based on an upgraded version of the Neverwinter Nights Aurora engine, developed by CDProjekt and released in late 2007. It describes the adventures of Geralt of Rivia, detailing his quest to regain his memories whilst pursuing revenge against a mysterious organized group, the Salamandra.

The title is set in The Verse described in the novels of The Witcher saga by Andrzej Sapkowski. Unexpectedly, it has sold rather impressively both in the US and worldwide, given that it's a niche PC game from an unknown foreign developer based on an unknown foreign IP. The sequel, titled The Witcher 2 Assassins of Kings was released on May 17, 2011, which was followed by The Witcher 3: Wild Hunt on May 19, 2015.

Tropes used in The Witcher include:

"Witchers are known to carry two blades. A silver blade for monsters and steel for humans."
"Both are for monsters."

Geralt: (To the Professor at the end of chapter 3) You're so full of shit, Professor!

"Witchers are known to carry two blades. A silver blade for monsters and steel for humans."
"Both are for monsters."

"That sword is for monsters!"