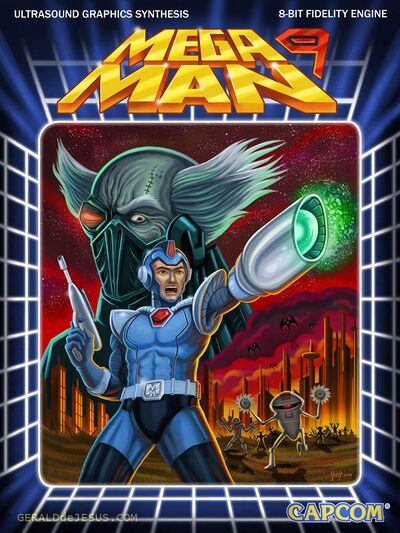 After Mega Man 7, Mega Man 8 and Mega Man and Bass that were featured in 16- and 32-bit graphics, respectively, the ninth installment of the Mega Man series saw its return to its 8-bit roots.

Just when people forgot all about Dr. Wily, robots all over the world began going crazy. It soon became apparent that these robots were those created by Dr. Light. As phone calls came pouring in to Light Labs, Dr. Wily interrupted all television programs to announce that these robotic riots were not his doing. He then continued to show video evidence that proved Dr. Light's involvement in the recent violent outbreaks. To make matters worse, Wily gave the account number to his personal bank account and announced that he would accept donations to build his own robot army to counter that of Light. Mega Man quickly volunteered to clear Light's name and was sent out to investigate the source of the problem.

Tropes used in Mega Man 9 include:
Retrieved from "https://allthetropes.org/w/index.php?title=Mega_Man_9&oldid=1895909"
Categories:
Cookies help us deliver our services. By using our services, you agree to our use of cookies.