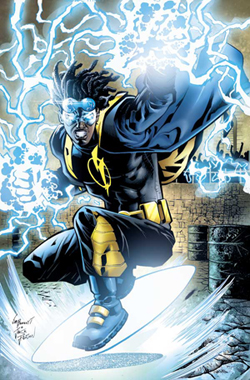 He'll put a shock to your system!

The use of lightning, huge electrical discharges, and stuff resembling them as a weapon to fry things with. This is one of the most common Elemental Powers and is part of the basic Fire, Ice, Lightning trio. It's also one of the handiest ones around, being used for pretty much anything and everything that the writers can think of.

When shooting lightning, it tends to be treated as a sort of beam you can aim and shoot anywhere. This doesn't make a whole lot of sense—lightning is just a really big static charge, like you get all the time when you're wearing sweaters. Static electricity will leap from something with high potential to something with low potential; the only way to aim it should be to modify the potential of both yourself and the target, in which case, it would be pretty much impossible to dodge. All this is pretty much always ignored.

Wielders of this power set have an odd tendency to be insane and have blond hair.

Related to Blinded by the Light and Ride the Lightning. Someone with this power may also be a Technopath. Contrast An Ice Person and Playing with Fire. For other uses of lightning and electricity, see Magical Defibrillator and Electric Torture. For the physics (or lack thereof) behind electrical attacks or weapons, see Chain Lightning, Lightning Gun, and Static Stun Gun.

Has nothing to do with the United States military rapid dominance doctrine, though that is where the name came from.

Examples of Shock and Awe include:

Retrieved from "https://allthetropes.org/w/index.php?title=Shock_and_Awe&oldid=1927772"
Categories:
Cookies help us deliver our services. By using our services, you agree to our use of cookies.