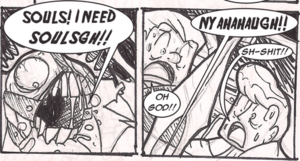 The moment at which a character realizes that they are completely and totally screwed. They may not always say anything in particular, but even if they don't, their faces are usually priceless (and in a manga, it tends to include a black, cracked-like background). This moment often features stronger language. This is the moment when they truly realize that the solid organic waste is about to collide with the Rotational Air Circulation Device.[1] Sometimes the first few notes of Chopin's Funeral march is used as background music to highlight how grim the situation.

They may feel that This Is Gonna Suck, and often exclaim, "You Have Got to Be Kidding Me!" or perhaps "I Want My Mommy!" or sometimes even "This Cannot Be!" Other characters might emit a Loud Gulp instead.

The effectiveness of this moment can be affected by the difference between their usual competence and confidence levels and how completely they are boned. Characters with low self-esteem or who are constantly crying out in terror are difficult (but not impossible) to make this trope work with. But that arrogant, so far unbeatable supervillain suddenly realizing he's about to have his ass royally kicked? It's easy to make that one work.

Can occur if one protagonist has been luring the other one into a trap, or if they just have some shiny new skill. Or they may simply be a lower-level villain who's just had the very bad luck to be confronted with a hero impossibly out of his league. On occasion, they will be discussing the situation when they realize the full import of it. Related to This Cannot Be!, and the polar opposite of Obi-Wan Moment, when despite the bad situation someone still manages to look composed. May result in a Heroic BSOD for a heroic character, or even a Villainous Breakdown for a villainous character. Nine times out of ten, this will immediately follow "What does this button do?". The remaining tenth follow some other temptation of fate. Also a very common reaction when a villain, normally a Chessmaster, Villain with Good Publicity, or Manipulative Bastard, realizes he's just been the victim of an Engineered Public Confession. Some characters react with less despair and more apathy; others look to their equipment for a solution. And for some, it is the crowning moment of despair.

Not related to Bring My Brown Pants, though it may very well cause such a moment—as Bill Cosby once said, "first you say it, then you do it!"

May also be a Precision F-Strike for the person in question.

When most of the cast available in the scene does this expression, it's a Mass "Oh Crap" moment. If someone tries to explain the situation to someone else, and realizes half-way through their own explanation they're in real trouble, it's Explain, Explain, Oh Crap.

See also Wide Eyes and Shrunken Irises. Say Your Prayers may be involved as part of this reaction.

Note: This trope is for In-Universe examples only. If you arrived here via a Pothole that treated it as an audience reaction, please remove it.

Examples of Oh Crap are listed on these subpages:

Retrieved from "https://allthetropes.org/w/index.php?title=Oh_Crap&oldid=1822611"
Categories:
Cookies help us deliver our services. By using our services, you agree to our use of cookies.