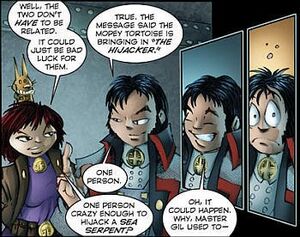 Bob has the situation under control, and is explaining it to his partner, Alice. While he initially thought everything was fine and going to plan, it's only once he stops to think about it and hears himself say it aloud that he realizes how much trouble he and Alice are really in.

Essentially, a case of in-universe Fridge Logic catching up to the characters, can be played for laughs or drama. Can be triggered by the listening party's Let Me Get This Straight... putting a new perspective on Bob's explanation.

The Oh Crap can also be simply that there really is No Time to Explain.

Retrieved from "https://allthetropes.org/w/index.php?title=Explain,_Explain,_Oh_Crap&oldid=1843782"
Categories:
Cookies help us deliver our services. By using our services, you agree to our use of cookies.