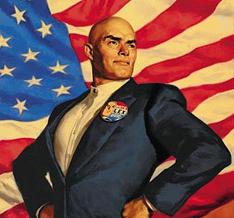 My name is Lex Luthor, and I approve this trope.

The Villain With Good Publicity is one of the most frustrating opponents our heroes can face. On the surface, this villain works within the system and commands a great deal of respect from the average citizen, but behind the scenes, they conduct all manners of nastiness. Even the heroes (or the audience!) may be fooled until The Reveal, unaware that The Man Behind the Man is someone so publicly trusted.

Should the heroes know the truth, they're still stymied by the fact that no one else does. Attempts to bust the villain will be met with harassment lawsuits, breaking & entering or assault charges, or bad press. The heroes may even be falsely painted as villains in the public eye. (Some heroes embrace this image and become the Loveable Rogue or the Anti-Hero.) Should the heroes turn up actual evidence that something is up, it'll probably be ripped up by the villain's crack legal team (which Villains With Good Publicity always have), or spun to look like honest behavior.

The Villain With Good Publicity is very good at getting the hero (or other innocents who get too close to the truth) accused of criminal activity. Then again, heroics are 90% based on breaking and entering, stalking, trespassing, assault, battery, and espionage anyway, so he may have a point there.

Worthy Opponents and Enigmatic Minions often find themselves working for the well-liked villain, unaware what their boss is up to. Same goes for Punch Clock Villains.

In a TV series, a Villain With Good Publicity is a good way to preserve the status quo; the best the hero can hope to do is foil a particular plot, not bust the actual villain. Although not always legally invincible, often the only way to defeat this foe permanently is to kill him. Heroes in this situation will frequently try to Trash Talk the villain, or tell him he won't get away with it.

If the heroes are really unlucky, they're up against the entire government (or church, depending on the setting). The villain might also be a single person within the government, a corporation or other public figure with a good PR department, or a religion engineered for this purpose. There's also a good chance that he/she is is using copious amounts of bribery to keep his/her image clean. If things get even worse, the public will actively assist the villain against the heroes.

This villain's favored weapon is the Propaganda Machine.

If you need to take down a Villain With Good Publicity, send in a Cowboy Cop, Knight in Sour Armor, or perhaps organize an Engineered Public Confession to out them as a Straw Hypocrite. The Ideal Hero and other idealistic heroes, by contrast, have no idea how to deal with these guys. Either way, any hero attempting to take one of these guys on can end up as a Hero with Bad Publicity.

Contrast with most Evil Overlords, who make no attempt to hide their villainy, and the Ancient Conspiracy, which hides its entire existence. The exact opposite is a villain who has a 0% Approval Rating, and a more extreme version is the Devil in Plain Sight (whom no one cares about one way or the other). Can be a form of No Hero to His Valet.

Related to Hidden Evil. May or may not deserve his reputation as a good guy. If so, expect the setting to lean towards the "cynical" end of the Sliding Scale of Idealism Versus Cynicism. May use Too Funny to Be Evil as an affable PR tactic. Villains who win over the fans are Draco in Leather Pants.

No real life examples, please; no, not even Hitler.

Examples of Villain with Good Publicity include: