What Does This Button Do? 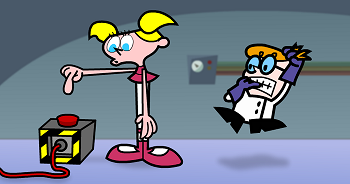 When it comes to curiosity, there are generally two main types. The first type is patient enough to wait for an explanation to be given, usually by an expert on a subject and/or its creator. Someone who can break it down into a more simplified language, to a point where it can be easily understood, what its benefits are, what dangers it may impose, and the like. The second type, well...doesn't have that kind of patience. Or insight. Or anything resembling restraint. They're willing to stumble blindly towards a control panel and start randomly pressing buttons. Usually they'll ask the all important question, "What Does This Button Do?" just before doing so. Or just after doing so, if the work emphasizes them being unthinking rather than reckless.

This is the kind of thing that can result in self-destruct sequences being set off, Wave Motion Guns made to be even more dangerous without anyone who knows what they're doing to run them, all while someone with half a brain will scream warnings (and insults to their intelligence) just before things get wrecked.

A very bad way to tempt fate. The proper response to anyone who asks this question is, "Don't touch it, you idiot!" Note, however, that big red buttons are usually a Chekhov's Gun: even in the event that a curious character is prevented from pushing it, rest assured that you'll eventually find out what the button does.

Beware! Dangerously Genre Savvy villains may leave them lying out in the open as Schmuck Bait...

Examples of What Does This Button Do? include: