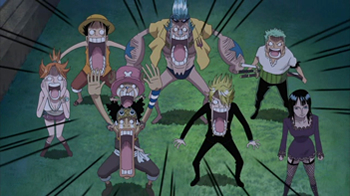 Holy crap, look at that girl, she isn't smiling!

T-Rex: Wow! The plants are nice and the birds are singing and the sun is almost down from the top of the sky. What a beautiful day!
Dromiceiomimus: But T-Rex, what if beauty is nothing but an illusion? What if we're all nothing but dreams within dreams that, for an instant, imagine themselves to be real?
All: OH SHIIIIIIII-

—Dinosaur Comics, "add a few Is every time you do it"

Sometimes serious, but often a comedy trope. When faced with something, most or all cast members in the scene PANIC. Related to Crowd Panic, except it's not about the Living Prop characters. Expect The Stoic or Only Sane Man to get everyone to shut up for long enough to deal with the problem.

Examples of Mass "Oh Crap" include:

(After Zoro has just cut a train car in two)
Lulu: Y'know, if you guys are gonna keep doing stuff like that, you should tell us first!
Luffy: You heard me say "cut this," right?
Lulu: I didn't think he COULD!!

Bradley/Wrath: *over the broadcasting system* Hello everyone.

"I felt a great disturbance in the Force, as if millions of voices suddenly cried out in terror and were suddenly silenced. I fear something terrible has happened."

"Aslan, who seemed larger than before, lifted his head, shook his mane, and roared. The sound, deep and throbbing at first like an organ beginning on a low note, rose and became louder, and then far louder again, till the earth and air were shaking with it. It rose up from that hill and floated across all Narnia. Down in Miraz’s camp men woke, stared palely in one another’s faces, and grasped their weapons. Down below that in the Great River, now at its coldest hour, the heads and shoulders of the nymphs, and the great weedy-bearded head of the river-god, rose from the water. Beyond it, in every field and wood, the alert ears of rabbits rose from their holes, the sleepy heads of birds came out from under wings, owls hooted, vixens barked, hedgehogs grunted, the trees stirred. In towns and villages mothers pressed babies close to their breasts, staring with wild eyes, dogs whimpered, and men leaped up groping for lights. Far away on the northern frontier the mountain giants peered from the dark gateways of their castles."

There was about half a minute’s silence and then, with a great clatter of armor, the whole crew were tumbling down the main hatch as quick as they could and flinging themselves on the oars to row as they had never rowed before...

Garak: It was all a trap. They were waiting for us all along...

Jerry Lawler: Look at your face.