Everything About Fiction You Never Wanted to Know.
Jump to navigation Jump to search
/wiki/Scott Hallcreator 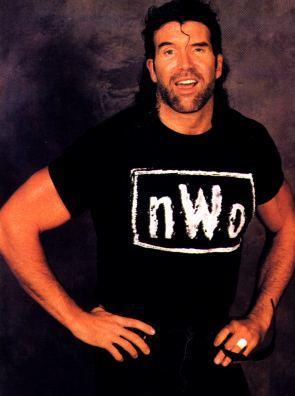 Hall in The Nineties. Before things got worse.

Scott Hall was a popular professional wrestler during the 1990s, having wrestled in the WWF as Razor Ramon and (more famously) in WCW under his real name as one of The Outsiders (alongside real-life friend Kevin Nash). The Outsiders, together with Hulk Hogan, formed the ultimate wrestling supergroup in the New World Order in 1996. After WCW's demise, he had brief runs in both WWE (as part of the reborn nWo) and TNA (with fellow Kliq members Nash and Sean "X-Pac" Waltman).

Hall's career accomplishments and fame/infamy as a performer are offset, however, by his numerous personal demons; he is an infamous abuser of alcohol and drugs, to the point where WWE (who offers to pay for rehab for any current or former contracted employee) has spent more to send Hall to rehab than on any other performer. These off-screen issues — which were infamously turned into a part of Hall's on-screen character in his last runs in WCW — transformed one of the industry's most promising performers into one of its most tragic figures.