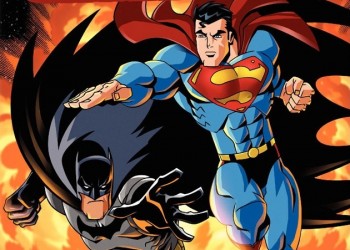 Think about your closest friends. If you know them well enough, you also know their strengths and weaknesses. You know how they think, how they react, how they tick. You trust them to know the same about you, too. You might even trust them enough to let them fix your car--but not drive it. Hell would freeze over before you let them drive it.

But no matter what, they will fight in tandem. They will watch each other's back. There is something genuinely satisfying about watching the heroes take out a room full of bad guys by working together. This isn't always limited to merely two people, as often the Five-Man Band can emulate even more varieties of combat.

Characters who tend to do this are The Hero and The Lancer, while The Big Guy can alternate between any of them. The Smart Guy takes down the Elite Mooks with precision Pressure Points and The Chick provides long-distance support as The Archer. This is one reason why the Badass Army tend to do so well even when outnumbered. Even a mismatched Action Duo can be Bash Brothers with enough bonding/training.

It is not uncommon in certain stories to have two separate badasses who come together, spend some time trying to kill each other only to eventually turn their skills onto the hapless enemy who happens to piss them both off.

If the "brothers" are actually related by blood, it's a Sibling Team. A combative inversion is Fearful Symmetry. In a fantasy setting, they might be a Sword and Sorcerer. Not to be confused with the Smash Brothers who are, well, Super. The romantic version is the Battle Couple. And finally, a female duo may well be Lovely Angels.

The name comes from the world of sports, where it refers to a pair of great players who end up on the same team. The first use of the term was in baseball, where Jose Canseco and Mark McGwire formed a dangerous duo for the late-1980s-early-1990s Oakland A's. It has since spread to other players and sports.

Examples of Bash Brothers include:

Retrieved from "https://allthetropes.org/w/index.php?title=Bash_Brothers&oldid=1848457"
Categories:
Cookies help us deliver our services. By using our services, you agree to our use of cookies.