Everything About Fiction You Never Wanted to Know.
Jump to navigation Jump to search
/wiki/The Kliqcreator 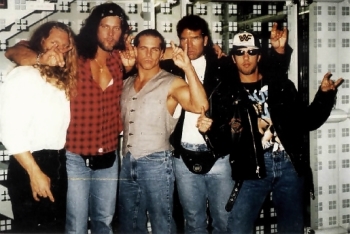 The Kliq is one of Professional Wrestling's most controversial behind-the-scenes "supergroups".

In 1993, Shawn Michaels, Scott Hall (Razor Ramon) and Sean Waltman (The 1-2-3 Kid, later known as Syxx or X-Pac) were working for the then-WWF. Michaels was a rising star, and Hall and Waltman were solid mid-card workers. All three were notorious hellraisers known for drinking and abusing drugs, and they all had ego to spare. Michaels was looking for a way to get himself even more over with the crowd, having just made an infamous heel turn by kicking ex-partner Marty Jannetty through the Barbershop window. He turned on WCW's show, WCW Saturday Night, one night, and found what he was looking for -- Kevin Nash, who was playing a comedic character called "Vinnie Vegas".

Nash, who was unhappy over at WCW, asked to be let out of his contract. He signed with the WWF the next week and became Diesel, who served as Michaels' bodyguard (Nash Michaels also became offscreen friends during this time). For two years, the group of Hall, Michaels, Nash, and Waltman slowly built their careers up; in 1995, the four men were some of the WWF's highest-profile stars. Michaels and Nash traded the WWF Championship between them, and Hall had several runs with the Intercontinental Championship (including two revolutionary Ladder Matches with Michaels for that title). The last man to enter the picture was a young Paul Levesque, who—after his own failed stint with WCW—signed with the WWF and became Hunter Hearst Helmsley (later shortened to simply Triple H).

The five men would amass a staggering amount of backstage power as a group. All five were close to Vince McMahon and had input on booking decisions (including which wrestlers they believed deserved a push). Victims of The Kliq's influence include Shane Douglas, Bam Bam Bigelow, Chris Candido, and Carl Oullet; The Rock was also supposed to be one of The Kliq's victims, but managed to secure his own place in history even with their objections. Bret Hart, who would have his career and life changed by the Montreal Screwjob (which Michaels, Levesque, and McMahon were in on), was perhaps the biggest victim of The Kliq's backstage politicking.

Before the Montreal Screwjob, however, came the "Curtain Call".

On May 19, 1996, the WWF put on a house show at Madison Square Garden in New York; this show was Kevin Nash and Scott Hall's last show with the company before they jumped ship to WCW. Levesque and Nash were working as heels at the time, and Michaels and Hall were faces. At the end of Michaels and Nash's steel cage match, Hall and Levesque came out to hug them goodbye in the middle of the ring.

This was a serious problem.

The vast majority of the wrestling industry were calling for The Kliq's heads, since they'd broken Kayfabe in front of the cameras (by showing that faces and heels were actually friends outside the ring, rather than mortal enemies). Vince McMahon had few options for punishment, however: Hall and Nash were leaving for WCW, Waltman wasn't in on it, and Michaels was (at the time) the WWF Champion and a big-name headliner. The punishment ultimately fell on Paul Levesque, who languished for well over a year in the midcard, jobbing to wrestlers such as the Ultimate Warrior. He was eventually allowed to shine as one of the founding members of D Generation X (which happened due to Michaels' influence).

Levesque's punishment for the Curtain Call, ironically enough, was directly responsible for the meteoric rise in popularity of Stone Cold Steve Austin. Austin won the 1996 King of the Ring tournament—which Levesque was scheduled to win before the Curtain Call—and delivered his infamous "Austin 3:16" speech after the tournament-winning match. Austin's incredible popularity following his victory launched the Attitude Era, which was arguably the most prosperous period in professional wrestling (and WWE) history.

In WCW, Hall and Nash formed the nWo with Hulk Hogan, a move that kickstarted the Monday Night Wars. The Hall/Hogan/Nash triumvirate wielded tremendous booking power (even moreso than in the WWF), and it was their decisions that either made or sank the careers of many a WCW performer. Waltman would join them a few months later, but he eventually jumped ship back to the WWF to join DX (making him the only person to be a part of both DX and the original nWo). Michaels and Levesque went on to become two of WWE's most successful and celebrated stars, and their behind-the-scenes clout has become both the wrestling business's worst-kept secret and a point of contention for both fans and fellow performers when considering the merits of their careers.

To this date, all five members of The Kliq remain closer than close behind the scenes.

The Other Wiki has an excellent page on The Kliq here.

Tropes that apply to one or all of the members of the Kliq
Retrieved from "https://allthetropes.org/w/index.php?title=The_Kliq&oldid=1927448"
Categories:
Cookies help us deliver our services. By using our services, you agree to our use of cookies.