Everything About Fiction You Never Wanted to Know.
Jump to navigation Jump to search
/wiki/Sean Schemmelcreator 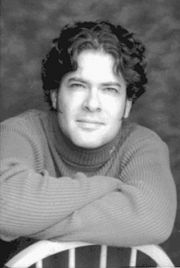 Sean Schemmel started dubbing in 1999. His first (and breakout) role would be the providing the voice for Goku in Dragon Ball Z (in other words, he became the English voice of possibly the most powerful and famous Shonen hero of all time). He originally wanted one of the villain roles, since he only saw a few episodes of the series before being cast, and NEVER knew who Goku was before walking into the recording studio! Once he saw that he was pasted on all the posters on the wall, he realized he was cast as "The Guy"! With Kai, and new video game adaptations, he is still voicing Goku to this day.

He has a MAJOR voice range; no pigeon hole there.

And he can scream, EPICALLY! This alone makes for Absolute Crowning Moment of Awesome!

Apologies from stealing the Nobuyuki Hiyama joke from his page.