Everything About Fiction You Never Wanted to Know.
(Redirected from Shadow the Hedgehog)
Jump to navigation Jump to search 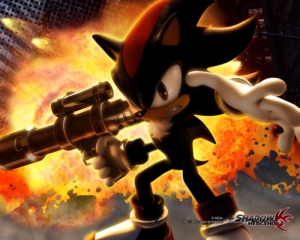 Shadow the Hedgehog is a 2005 game in the Sonic the Hedgehog series that focuses on the Anti-Hero black hedgehog, Shadow. The game begins with Shadow on the outskirts of Westopolis, just as the sky turns blood red and aliens begin swooping in to invade. Shadow is about to turn away, uncaring, but a strange creature with a terrible voice speaks his name, calling on him to bring the alien leader - by the name of Black Doom - the Chaos Emeralds. Thus begins Shadow's personal quest of self-discovery, which can take any one of 326 (!!!) paths through the game's 22 levels.

While the typical controls of the 3D entries in the Sonic series apply to some extent, it is playable as a third-person shooter, a different direction for the franchise. Its Darker and Edgier tone, Shadow's constant Wangsting, and frequent navel-gazing turned many fans of the franchise away, and the game was thoroughly thrashed by critics. On another note, this game marks the debut of the 4Kids cast from Sonic X into the video games. Ironically, they started off doing the Sonic game that's the least kid-friendly.

Tropes used in Shadow the Hedgehog (video game) include:

Eggman: How can I take over the city and begin building the Eggman Empire if there IS no city?!