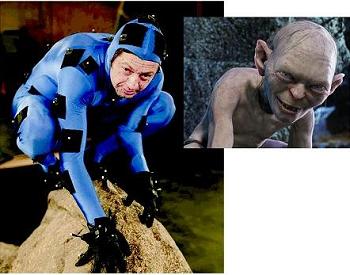 Characters created with computer graphics over a motion-captured performance.

Named after the actor Andy Serkis, who was transformed by CGI wizardry into the characters of Gollum (from The Lord of the Rings) and King Kong for Peter Jackson's recent films. The trope name is a spin on the phrase "circus folk".

This can land in the Uncanny Valley if the CGI overlay doesn't quite work.

Examples of Serkis Folk include: