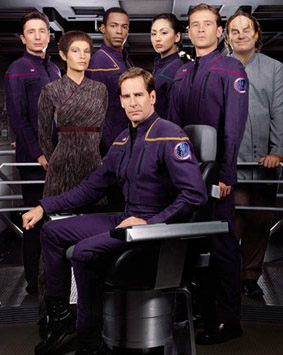 Welcome aboard the Enterprise NX-01.

It's been a long road, getting from TOS to here...

The fourth Spin-Off of the long-running Star Trek franchise, and the first of the spinoffs not to go seven seasons. It ran from 2001-2005.

A prequel series set in the 22nd century, about 100 years before Star Trek: The Original Series. Captain Jonathan Archer commands a new warp-5 starship, Enterprise (NX-01), seeking out new life and new civilizations. The key selling point of this series was that space travel was not as casual as it became later in the chronology. Most humans have never even left Earth and those who have rarely made it out of Earth's solar system. Unlike the other modern Trek series, these characters were prone to swear and walk around in their underwear. The series only lasted four seasons, making it the shortest lived Star Trek series since the animated series, and the shortest-lived live-action series in the franchise other than the original.

The first and second seasons dealt with exploration. The Enterprise was the first human ship to reach warp 5, and was therefore the first ship to visit many of the worlds explored in these seasons. Some episodes featured the crew encountering phenomena that Star Trek fans would be familiar with, but the characters wouldn't. The temporal cold war arc was also introduced during this time. Factions in the future were using time travel technology to manipulate the time stream in their favour. This plot was forced on the writers through Executive Meddling, so it unfortunately just pops up from time to time before finally being terminated the second the executives let them in season four. During season two, there was a sharp decline in viewer-ship which led to a retool for season three.

To lead into the third season, an alien race called the Xindi attacked Earth because of an unknown element of the Temporal Cold War arc. Enterprise was refitted into a more efficient battleship and sent to a chaotic region of space called the Expanse to either stop further attacks against Earth or enter negotiations. The entire season dealt with the imminent war and moral compromises the crew had to make, while ignoring the original arc featuring the Suliban.

At the start of Season 4 most of the writing staff was replaced and a new head writer, Manny Coto, was put in charge. This resulted in significant changes. Instead of a season-long Arc, most stories were spread over 2 or 3 episodes at a time. Sometimes these mini-arcs would carry over to a later mini-arc. First and foremost, the season dealt with the ramifications of the Xindi attack, with many humans becoming violently xenophobic. But likely the most popular arc was one dealing with social reform on Vulcan, which was a piercing look into their culture that hadn't been done since the original series.

Sadly, Paramount had no serious intention of renewing the series after season four. The writers had been batting around ideas for where things would have gone in season five (including the Romulan War which is a well-established part of Trek canon), and they do sound like they would have continued improving.

We do have a novel continuation. See: Star Trek Enterprise Relaunch.

Theories as to Enterprise's place after Star Trek split the universe's timeline are many. The simplest is that it takes place in both. Others are that the show occurs in the Star Trek XI timeline but not the original timeline, or even that Enterprise actually occurs in a third timeline. Word of God is that the events of Star Trek: First Contact did alter the timeline of Enterprise somewhat (also explaining the more advanced technology), though whether this actually puts it in a different timeline to the other Trek shows is still up in the air.

Retrieved from "https://allthetropes.org/w/index.php?title=Star_Trek:_Enterprise&oldid=1965181"
Categories:
Cookies help us deliver our services. By using our services, you agree to our use of cookies.