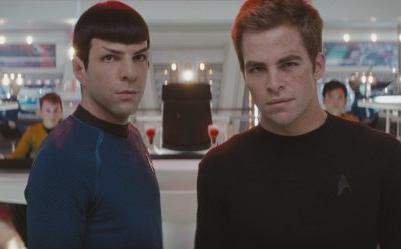 In 2233, about 30 years before the Original Series was supposed to take place, The Federation Starship Kelvin comes across a "black hole"-like spatial phenomenon near a distant sun. Emerging from it is a massive ship called the Narada captained by a Romulan named Nero. Deploying weaponry vastly superior to that of the Kelvin, the Narada forces the Federation crew to abandon ship, with many members lost. While the survivors flee the devastating battle, a young boy is born amongst them: James Tiberius Kirk, son of the first officer (and extremely short-term captain) of the Kelvin. Kirk grows up an angry teenager and a rebellious young adult until he is recruited to join Starfleet.

As Kirk makes waves at Starfleet Academy, the Narada emerges again after years in hiding. The Federation scrambles its fleet to confront this menace, deploying the flagship Enterprise for the first time. All the rest of the fleet is destroyed, with the Enterprise only surviving do to initial problems getting to the battlefield and when they manage to do so their captain, Christopher Pike, is taken hostage. Learning that the Narada is from the distant future and that they all had a major part in creating that future, it thus falls on Kirk and Spock to overcome their initial mistrust of each other and the ship's cadet[1] crew (the young TOS characters) to somehow save the day.

Retrieved from "https://allthetropes.org/w/index.php?title=Star_Trek_(film)&oldid=1964490"
Categories:
Cookies help us deliver our services. By using our services, you agree to our use of cookies.