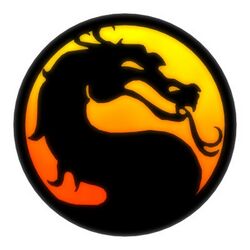 A long running series of fighting games, started and developed over a long time by Midway Games, which has crept out into other media, defined almost solely by its uber-violence and the odd spelling of its name.

In its prime, for about three games, Mortal Kombat was the very essence of cool. It had style, that passed for maturity at the time, a certain something that more family-friendly games couldn't replicate. Packed with secrets, Easter Eggs, and hidden characters (and largely predating the Internet), the first few games lent themselves well to an Urban Legend of Zelda or two and it seemed like just about anything was possible.

What started as a fairly typical Street Fighter II/Enter the Dragon global tournament pastiche quickly transmogrified into a interdimensional war and the mass genocide of the human race, which still somehow managed to shake out in the form of a series of one-on-one matches. The series, once a heavy hitter in the video game world, struggled with the inability to transition smoothly to 3-D.

Mortal Kombat was nothing special in the age of Tekken and Virtua Fighter, but in its heyday it was incredibly risqué. Especially when Nintendo practically owned the video game franchise, most games did not include overt, bloody violence. Pre-MK, most designers kept some sort of plausible deniability in their games, claiming that nobody was really dead, or it was only monsters, or some other excuse. Mortal Kombat was the first game to ditch that pretense, with copious amounts of High-Pressure Blood, screaming, impaling, and Finishing Moves that delighted in how many body parts they could sever. The Moral Guardians went through the roof, but the series was a smash hit anyway.

The designers, encouraged by their success, racked up the body count in subsequent installments, devising entirely new methods of dismemberment and decapitation. Eventually, the violence grew cartoonish in its excess, and the gameplay engine was not enough to sustain its popularity once other companies caught on to the idea that violence was nothing to be scared of. And while other series have made a successful leap to 3-D, MK had "hit and miss" luck there. Add that to the fact that virtually no one ever actually died in the story despite the ultraviolent nature of the games -- a move that virtually guarantees stagnation -- and you've got a series that has seen better days...

... Then Midway goes bankrupt and Warner Bros promptly picks up the studio that produces the series (now known as Netherrealm Studios). The end result: a complete Continuity Reboot (with an in-game explanation, no less!) in 2.5d with the Executive Meddling that caused the Sequelitis done away with.

The series' main games are the following:

There are also some spinoffs:

As well as adaptations to other media:

The general story is about a universe with several different dimensions (called "Realms") and how one of these, called Outworld, is on a mission to take over all realms. They are bound by laws set up that they must challenge the greatest warriors of whatever realm they wish to invade to a tournament. If the Outworld warriors win, they have free rein, but if the realm's warriors win, Outworld cannot enter the realm. Outworld's next target is Earth, and it's up to a select few warriors to determine the fate of their realm.

Besides that, we have Loads and Loads of Characters and their special moves and backstories. Character sheets can be found here, and are currently in need of some love. Especially those of later games.

Retrieved from "https://allthetropes.org/w/index.php?title=Mortal_Kombat&oldid=1929039"
Categories:
Cookies help us deliver our services. By using our services, you agree to our use of cookies.