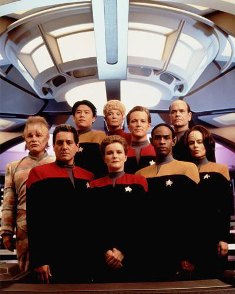 The third 'new generation' Star Trek, it ran for seven seasons, from January 1995 through May 2001. In the first episode, the USS Voyager was pulled across the galaxy by an alien device. Janeway destroyed the device during a battle rather than let it be misused, stranding her ship seventy-five years' travel time from home.

For the next seven seasons, the Voyager looked for a shortcut back to Earth while dodging or defeating the assortment of Aliens and Monsters. They even crossed paths with a pair of Ferengi that had been zapped to the Delta Quadrant back in Next Generation, at least one Romulan, and even another Starfleet vessel, also kidnapped by the Caretaker and trying to get back to the Federation.

Early on even the producers found a certain problem with the premise, in that the series had a singular goal of returning home. That meant while there was plenty of "Strange New Worlds" to discover, they were always looking home, and constantly missing opportunities for shortcuts. Another problem was the use of Infinite Supplies. Early in the series, many fans quickly dubbed Voyager the HMS Reset Button; the conclusion of almost every episode usually resulted in a return to status quo ante.

Interestingly, the show suffered from such inconsistent writing that even the actors complained; Kate Mulgrew mentioned that her character (the ship's captain) was never portrayed the same way from episode to episode (causing Janeway to switch between upholding the Prime Directive no matter the cost in some episodes, and having no problem with breaking it whenever it proves even a minor inconvenience in others), and Robert Beltran's notoriously wooden acting has often been attributed to his contempt for the writing of his character and the plots, which he's expressed in several interviews. At least some of this has been ascribed to Executive Meddling on the part of Paramount, hampering the production team on building a stronger show.

The show was a frustrating mix of genuinely good entertainment and "safe" old Star Trek stand-bys. Part of this was a predominance with episodes of the Spotlight-Stealing Squad between Seven-Of-Nine and The Doctor. The lackluster response to Voyager was actually a serious consideration to hold off on further Star Trek series (which was demanded anyway). But it was also the near-magical power of the technology in this series that made them decide upon a less-evolved Prequel series in Enterprise.

That said, Voyager was notable for taking on stories and subjects that even its very daring sister series, Deep Space Nine, didn't touch — the crew encountered a Starfleet vessel that was willing to totally discard its Federation principles for the sake of getting home, faced the Borg on their home turf, and even tackled the moral and ethical implications of assisting in a suicide.

Voyager is known throughout Trek fandom as a series that featured an episode so incredibly sub-par that both the fans and the producers unofficially struck it from canon after it aired (unless you count an offhand comment in a later episode... which officially strikes it from canon).

However, Voyager is also widely considered to have the most beautiful and evocative theme music the franchise has ever produced (albeit not the most iconic; that honor goes to TOS and TNG). It has been said that Voyager‍'‍s theme is the music to what the show should have been.

If you want to read something like an Abridged Series or Mystery Science Theater 3000 version, try Five Minute Voyager.

Want reviews of this? No problem, just ask Chuck Sonnenburg at SF Debris!

And see also the Star Trek: Voyager Relaunch for the show's continuation in novel form.

The first game in the Star Trek Elite Force video game series takes place in this show, and the actors from the show provide their voices for their counterparts (except Jeri Ryan as Seven-Of-Nine, until an expansion pack including her was released).

There are also several shows Shows Within a Show. They contain examples of

The Adventures of Captain Proton!

Retrieved from "https://allthetropes.org/w/index.php?title=Star_Trek:_Voyager&oldid=1741385"
Categories:
Cookies help us deliver our services. By using our services, you agree to our use of cookies.