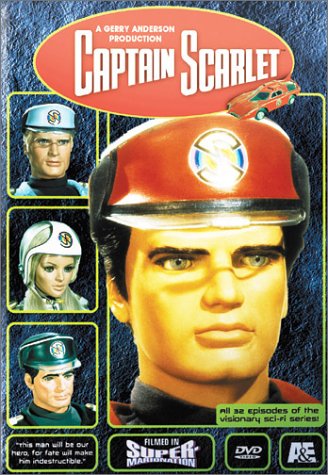 This man will be our hero, for fate will make him indestructible.

Set Twenty Minutes Into the Future, it tells the story of a "war of nerves" between humanity and a race of Martians called the Mysterons.

The aliens were never seen in person and would attack Earth by killing prominent humans and replacing them with superpowered duplicates who would attempt to perform terrorist attacks. Their primary agent was Captain Black, a former Spectrum agent who was turned after accidentally starting the war by panicking and attacking them first.

Opposing them were the Spectrum organisation, an international defence force whose best agent, Captain Scarlet, is killed and cloned in the first episode. He regains his humanity through Heroic Willpower and a convenient building collapse/jolt of electricity (depending on which version you watch). However, he still has the clone body's powers of Nigh Invulnerability.

Like the earlier Thunderbirds, Captain Scarlet was produced by animatronics expert Gerry Anderson. The difference here is that the puppeteers used an upgraded design that places the internal mechanisms in the chest area of the puppets as opposed to the head. This change allowed the creation of puppets to forgo the characteristic oversized heads of previous super-marionettes for more realistic proportions. As a result, the show looks a bit like the old 12" G.I. Joe action figures have come to life, which Anderson later noted made them feel less expressive as a result.

A CGI Remake, Gerry Anderson's New Captain Scarlet, appeared in 2005. The new series lasted two seasons (the original only lasted for one), but remains lesser known than the original due to being Screwed by the Network and not achieving international broadcast or DVD release.

Tropes used in Captain Scarlet include:

Remember, Captain Scarlet is indestructible. You are not. Do not copy him.