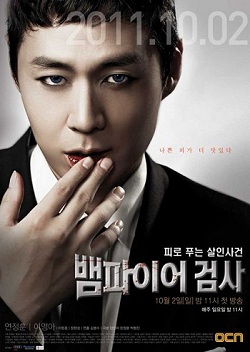 Prosecutor Min Tae Yeon is a reluctant vampire. As he uses his abilities in his day job, his main goal is to solve a 7-year-old murder in which the victim was close to him and the culprit was undoubtedly another vampire.

Tae Yeon is asked to set up a special taskforce to investigate unusual homicides in the Seoul area. To this end, he is given several team members:

The team is under the mantle of Chief Prosecutor Jang Chul Oh, who sometimes clashes with Prosecutor Tae Yeon. Together, they try to make Seoul safer for the living and the undead.

Tropes used in Vampire Prosecutor include:

Retrieved from "https://allthetropes.org/w/index.php?title=Vampire_Prosecutor&oldid=1561050"
Categories:
Cookies help us deliver our services. By using our services, you agree to our use of cookies.