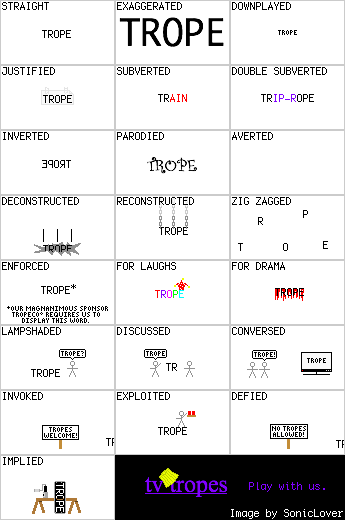 Even with tropes about tropes (metatropes) that describe how tropes tend to be used, it can be hard to pin down the exact relationship between a Trope and a particular work. This is a quick-reference guide, illustrated for clarity with two simple examples:

See also Playing with Wiki, an entire subwiki dedicated to doing this to every trope in The Catalogue, and in particular Trope Name/Playing With, which is a reasonably concise version of this list.

Tropes can also be played differently in terms of tone and style:

Specific characters (or the narrator) can also play with tropes:

And finally, a special case:

Retrieved from "https://allthetropes.org/w/index.php?title=Playing_with_a_Trope&oldid=1714408"
Categories:
Cookies help us deliver our services. By using our services, you agree to our use of cookies.