Our Vampires Are Different

Subtrope of Our Monsters Are Different. This one deals with everyone's favorite undead bloodsuckers. 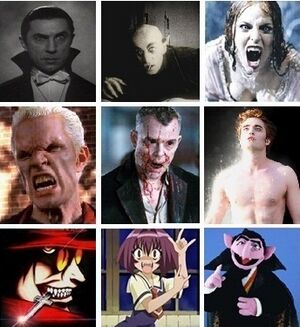 You see, doctor, there are as many species of vampire as there are beasts of prey. [1]

A work will usually address these baseline rules even if they're not enforced. Sometimes an unused rule will be explained away as a Fake Weakness propagated by the vampires themselves.

Some folklore claim the only way to permanently kill a vampire is to hammer a stake through its heart, shove garlic in its mouth, cut off its head, tear off its ears, dismember it, burn the pieces in a fire, and then scatter the ashes across holy ground. This will also permanently kill most anything, including pale spooky goths who happen not to be vampires. A few old folklore suggest that even this only works until a full moon shines on the ash. All this on the theory that vampires were corpses animated by evil spirits. Doing all these things rendered the corpse unusable by the spirit. By contrast, the easiest supposed way to stop a vampire is finding his coffin and turning him face down to make him "bite the dust, not people".

The purpose of vampires in the story varies quite widely. They serve as the Big Bad or as a metaphor for something (communicable diseases like plagues or STDs; alcoholism, drug addiction, denial of aging). There is some danger of the vampire character being too on-the-nose for the metaphor.

The "baseline rules" above are strongly influenced by Hollywood tradition, and not "real" vampire folklore, or even classic vampire fiction. For instance, as (properly) shown in the 1992 Dracula with Gary Oldman and Winona Ryder, and in 2003's League of Extraordinary Gentlemen, Dracula and other "folkloric" vampires were at the most inconvenienced by sunlight, not killed instantly.

In Stoker's novel and earlier vampire lore, sunlight did not cause vampires to go up like flash paper. Several times in the novel, Dracula appears in broad daylight with no ill effects. He is simply incapable of using at least some of his vampiric powers during the daylight (he cannot change form except at dawn, noon and dusk, but still seems to be able to charm wolves to some degree). Sunlight causing a vampire to suffer pain and damage, glitter, smolder, or go up like a one man pyrotechnic band was pretty much wholly created by Hollywood, and specifically, by F.W. Murnau in Nosferatu, the first film to use this idea and probably its inventor (which incidentally was made in 1922 in Germany, when a typical Hollywood film consisted of Buster Keaton being chased by a bunch of coppers).

Note that having a heroic vampire no longer counts as "different". Vampire Refugees are also a frequently used trope.

Differences may be reinforced by spelling it "Vampir" or "Vampyre", or using a clever synonym like "nosferatu" "sanguinarian" or "strigoi". If the differences are emphasized by overt mocking of other authors and unused vampire tropes it becomes Your Vampires Suck.

Examples of Our Vampires Are Different are listed on these subpages:
Retrieved from "https://allthetropes.org/w/index.php?title=Our_Vampires_Are_Different&oldid=1823729"
Categories:
Cookies help us deliver our services. By using our services, you agree to our use of cookies.