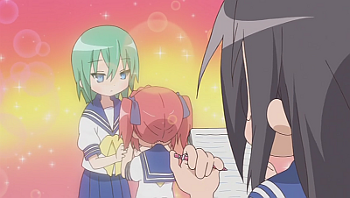 Why 'ello there, girl! Shh! We've just come across a wild yuri fan. Keep an eye on this sheila, inspiration has just struck and she's likely to show us something really special...

Just as Yaoi Fangirls exist out there (Yaoi Fanboys exist too, but you have to look really hard), there are Yuri Fans. For those of you not familiar with Anime terminology, "yuri" means "girls love" (and "yaoi", "boys love") in Japanese, a nation far more open to homosexuality in (animated) media than many in the West.

In regards to yuri fanboys, the difference between them and a guy who just thinks Girl-On-Girl Is Hot is that a yuri fanboy is interested in actual Yuri, including the Shipping aspects of the fandom, while the latter involves individuals who may never have seen a Girls Love work in their lives, so long as they get turned on by girl on girl. Fictional yuri fanboys don't show up often as a significantly greater emphasis is placed on non-shipping Girl-On-Girl Is Hot types.

Yuri Fan is for shipper examples. For non-shipping examples who still love seeing girl/girl action, see Girl-On-Girl Is Hot (although the two tropes can overlap). Not to be confused with fans of Lowenthal, Lowell, Sakazaki, Volte Hyuuga, Petrov, that creepy fellow who failed to take over the Soviet Union by mind control back in the '70s, the first man in space, an ex-Spetsnaz soldier, or a 3WA Trouble Consultant... well, there can be some overlap with that last one.

Examples of Yuri Fan include: