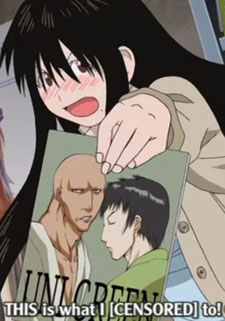 The Japanese term used for a yaoi fangirl is Fujoshi, which is a reclaimed term based on a homophonic pun. (There are two characters that are pronounced "fu", with one meaning "respectable woman" and the other meaning "fermented or spoiled"; the usage of fujoshi here translates loosely to "rotten girl", i.e. a woman unfit or "spoiled" for marriage as a result of consuming fictional gay content.) The word is often misused to mean "female otaku," causing female otaku who are not fujoshi (and know the meaning of the word) to correct people everywhere. The male equivalent is called a Fudanshi (loosely, "rotten man"), but oddly enough, a lot of Fudanshis are straight or bi. Actual gay men are more likely to be into the Bara Genre. In any case, Yaoi Fanboys are vanishingly rare in fiction.

Some Yaoi fans are likely to think that Het Is Ew and many of them tend to be guilty of Die for Our Ship and Ron the Death Eater as a result. They may also indulge in Ukefication. In series where Yaoi Fangirls are seen, at least one joke will be made that involves the Yaoi fangirl's dirty imagination and at least one of the male characters. This often goes hand in hand with said yaoi fangirl having a (usually rare for females) Nosebleed.

See also Slash Fic, Most Fanfic Writers Are Girls, Guy-On-Guy Is Hot. Compare Yuri Fan and Girl-On-Girl Is Hot for the female-on-female equivalents.

Examples of Yaoi Fangirl include:

Retrieved from "https://allthetropes.org/w/index.php?title=Yaoi_Fangirl&oldid=1947572"
Categories:
Cookies help us deliver our services. By using our services, you agree to our use of cookies.