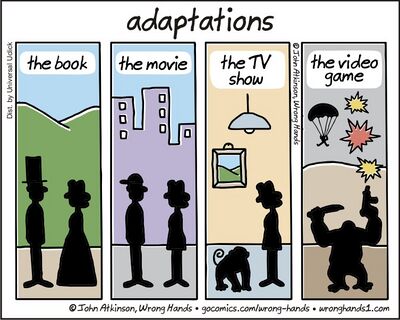 The gradual distortion or even disintegration of a world and its characters during its odyssey from original source material to movie to TV movie then to television series then to video game and finally to licensed derivative work. The dramatic equivalent of photocopying a photocopy of a photocopy.

Every step away from the original property involves new input from multiple directions which dilutes and changes the flavor and behavior of the story. When handled well, Adaptation Decay can be minimized, and each generation of the process will remain reasonably faithful to the original. Handled poorly, and the TV series version of a favorite novel will look like a completely different product that just happens to have some of the same names.

Anime frequently suffer some degree of Adaptation Decay, since many series are based on either manga or video games, which are subject to less censorship than TV shows. More Egregious examples include dropping or adding characters. Additionally, when an anime series is brought to the United States, it may suffer further decay if it is being translated with an eye toward broadcast markets—dialogue may be arbitrarily changed or censored, and entire plotlines may be removed.

This page is for fictional examples only. For Real Life examples of Adaptation Decay, go to one of these subtropes:

(Note: if you see an example of this trope on a work's YMMV page, please remove it. Unless the example is in-universe, in which case, move it back to the main page.)

Distantly related to Sequelitis. They Just Didn't Care is most of the times related to this trope.

Retrieved from "https://allthetropes.org/w/index.php?title=Adaptation_Decay&oldid=1864971"
Categories:
Cookies help us deliver our services. By using our services, you agree to our use of cookies.