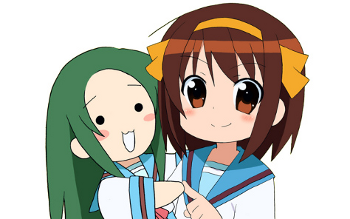 I have no interest in ordinary chibis!

The Melancholy of Haruhi Suzumiya-chan (Suzumiya Haruhi-chan no Yūutsu) and Nyoron Churuya-san are two gag manga spinoffs of Haruhi Suzumiya, animated and broadcast on YouTube as three to five-minute shorts. Though famous for "trolling" on their fanbase as of late, Kyoto Animation was rumored to produce this series' as a way to pacify the fans for waiting 3 years for an actual 2nd Season of Haruhi!

Both series have now reached their conclusions, with Haruhi-chan 25 and Nyoro~n 13 being the last episodes. Both are available on Crunchyroll, along with the regular Haruhi Suzumiya episodes.

Bandai has licensed both series and released them on two DVD sets. Haruhi-chan's manga is licensed by Yen Press.

The Melancholy of Haruhi Suzumiya-chan takes the characters and situations from Haruhi Suzumiya, chibifies them, and turns the madness and comedy up to eleven while adding copious amounts of High-Octane Cute. 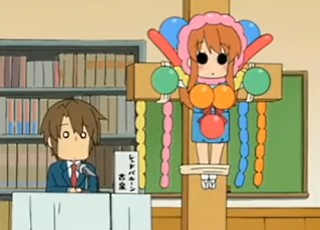 Faux Symbolism at its most WTF.

Tropes used in Haruhi-chan include:

I can haz smoked cheez?

Everyone besides Churuya and Ashakura is rendered with the same generic, non-super-deformed body with Eyes Always Shut, and they're all general jerk asses. Still, Churuya usually gets a happy ending after enduring some hardships throughout the rest of the episode.