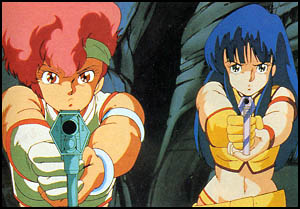 You will remember to call them "Lovely Angels", won't you?

Humanity has abandoned Earth and spread across the galaxy, but that doesn't mean there aren't any problems any more. In fact, there are quite a lot of them, and some of them are worse than people could have dreamed of before going into space. An agency of the galactic government called the Worlds Welfare Work Association ("3WA") has its own special way of dealing with these problems: it dispatches teams of highly-trained, well-equipped troubleshooters, called "Trouble Consultants", to find the trouble and, well, shoot it.

One of the most successful teams of Trouble Consultants is the "Lovely Angels", two teenaged girls who have a near-perfect success record. However, they also have a reputation of blowing up everything they touch (which isn't fair: only about a third of their missions end with something being destroyed, and it's (almost) never their fault), which has led to their unofficial and hated nickname of the "Dirty Pair". On the other side of matters, the things they have accidentally blown up have on occasion been inhabited planets, so it's not as if their reputations are undeserved.

Haruka Takachiho created the Pair in a set of stories published as Light Novels (which continue to be published), set in the same continuity as his other series Crusher Joe (which debuted 2 years earlier). The production studio Sunrise adapted the stories into a successful action/comedy TV series in 1985, which continued into a movie, an OVA series and two feature-length OVAs. In 1994, the franchise was rebooted as Dirty Pair Flash. Meanwhile, Adam Warren (future author of Empowered) and Toren Smith (of translation house Studio Proteus, who left after the first three miniseries) obtained the rights to create an English-original manga-styled Dirty Pair comic miniseries for Dark Horse Comics, technically based on the original novels instead of the anime.

The Dirty Pair anime was originally translated in the US by Streamline Pictures in the 90s, with the release of the movie and feature-length OVAs. Later, ADV Films released Dirty Pair Flash, the OVA series, the feature-length OVAs and the movie. They had plans to release the original TV series, which fell through due to poor sales. However, the TV series was finally licensed and released by Nozomi Entertainment. Nozomi also re-released the movies, the original OVAs and Dirty Pair Flash in 2012. The TV series is currently[when?] available on YouTube and DVD.

Dark Horse Comics is currently[when?] publishing translations of the first two light novels. They also published the comics by Adam Warren (after the original publisher Eclipse Comics went out of business), but those are out of print now.

Also, starting in March 2010, the Seinen manga magazine Monthly Comic Ryu started publishing an adaptation of the first light novel, The Great Adventures of the Dirty Pair. The artist for this version is Hisao Tamaki, who is most famous for the manga adaptation of Star Wars: A New Hope.

More information about the Dirty Pair, in all of their incarnations, is available at the website Tea Time in Elenore City.

(Original entry text written by Rob Kelk for The Anime Primer, and used with permission of the author.)

Dirty Pair is the Trope Namer for:
Tropes used in Dirty Pair include:
Retrieved from "https://allthetropes.org/w/index.php?title=Dirty_Pair&oldid=1825373"
Categories:
Cookies help us deliver our services. By using our services, you agree to our use of cookies.