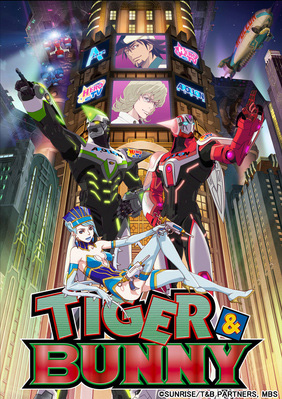 In the fictional metropolitan city of Sternbild, superpowered humans known as "NEXT" have been appearing for the last forty-five years. Some of these "NEXT" have chosen to use their powers to become Corporate Sponsored Superheroes, fighting crime and saving lives while sporting logos on their suits and raising the profiles of their sponsors.

Documenting all of this is the mega popular Reality TV show "HERO TV", which awards "Hero Points" for heroic deeds such as apprehending criminals and saving civilians, with the coveted title of "King of Heroes" going to the crimefighter with the most points at the end of the season.

One such hero is Kotetsu T. Kaburagi (a.k.a "Wild Tiger"), a veteran superhero who relies on his gut instincts and years of experience to fight crime. Though obligated to work for the best interests of his sponsors, Kotetsu follows his own code of honour, putting his heroic responsibilities over showmanship and saving people regardless of collateral damage to public property, earning him the (begrudging) nickname of "Crusher for Justice".

Due to his lack of popularity, Kotetsu is forced to team up with Barnaby Brooks Jr., a rookie hero with the exact same power as Kotetsu, and whose cynical and modern approach to crimefighting clashes horribly with Kotetsu's old-school sensibilities. Together, They Fight Crime.

Directed by Keiichi Sato, featuring original character designs by Masakazu Katsura, and animated by famed studio Sunrise, Tiger and Bunny premiered in April 2011 in Japan, and is simulcast in North America by Viz Media), in France by KZPlay, in the UK by Anime on Demand, and in Australia by Siren Visual on ANN [dead link].

An English dub is currently in production.[when?]

Two movies have been announced.

Tropes used in Tiger and Bunny include:
Retrieved from "https://allthetropes.org/w/index.php?title=Tiger_and_Bunny&oldid=1818618"
Categories: