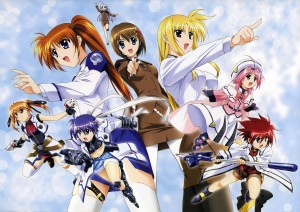 Is every adult male in Mid-Childa a draft dodger?

An Fundamentally Female Cast is when a work's cast is dominated by women in a situation where this is incredibly unlikely. This can range from males being present in the setting but not given screen time or importance to the story, to literally the majority of the people in the main setting are female. As a side effect, you can expect any male characters that do appear to gravitate to satellite status. Older women (where "older" can mean "over twenty-five") don't tend to fare much better.

There are two main reasons for a work choosing to have an Improbably Female Cast: they target a male demographic and the many women provide Fan Service and Les Yay, or they target a younger female demographic and are simply going with characters the intended audience will most likely empathize with. Confusion between these two motivations can easily result in a Periphery Demographic for both that can leave you asking "What Do You Mean It's Not for Little Girls?"

For another way that writers of Bishoujo Series get around needing all these female characters, see Otaku Surrogate. If there are a bunch of boys around, and it's due to Moe appeal rather than because the target audience might ignore girls, it may have a Cast Full of Pretty Boys.

Examples of Fundamentally Female Cast include:

Retrieved from "https://allthetropes.org/w/index.php?title=Fundamentally_Female_Cast&oldid=1946198"
Categories:
Cookies help us deliver our services. By using our services, you agree to our use of cookies.